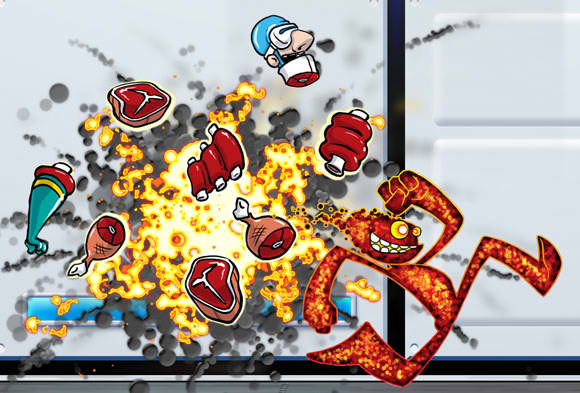 I follow Twisted Pixel on Twitter, so it caught my eye last night when I saw the makings of a rumble. Deciphering tweets is an exercise in masochism, so I will sum up:  Did you ever play the excellent 'Splosion Man?  You know, the one made by indie developer Twisted Pixel that let you 'splode everywhere?  The game that may have the greatest end credit sequence of all time?  Well Capcom hopes you didn't.  Their new title for the iPhone, MaXplosion, looks more than a little familiar.  It looks like a cheap version of 'Splosion Man, with a whole lot less awesome.

In MaXplosion, you play as a red demon/cat thing that is trying to escape a laboratory.  You can jump from platform to platform by exploding yourself up to three times.  This is exactly the same game as 'Splosion Man, but, once again, not as awesome.   The graphics and music are even eerily similar.

Since Capcom is huge and evil, and Twisted Pixel is small and neutral, it looks like little can be done. Gamers can pass judgement with their wallets, but who am I kidding, we pay $15 bucks for four multiplayer maps.  I guess an alternate headline could be "'Splosion Man Lite Now Available for iPhone".  Now you may think that people steal ideas all the time, and the do.  The difference here is that usually it's smaller publishers copying larger, successful models.  This is a huge publisher ripping off an indie developer.  Says Michael Wilford of Twisted Pixel via Twitter: "Best part is, we originally pitched @Splosion_Man to Capcom and they said no."  Booooo, Capcom!  I hope Twisted Pixel's next game is called Super Resident Bionic Dead Man vs. Lost Devil Void Commando IV Turbo Edition: The Age of Booty Years and they charge sixty bucks for it.  I'll buy two copies.