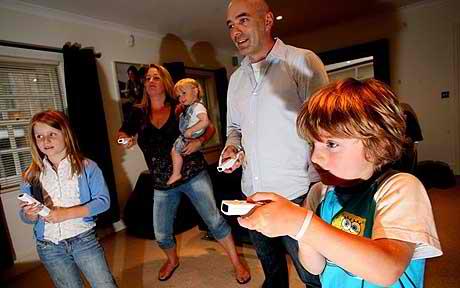 A new study from BYU's School of Family Life has come to the conclusion that co-op gaming between parents and daughters has beneficial effects for the daughter.  The study is titled "Game On. . . Girls: Associations Between Co-playing Video Games and Adolescent Behavioral and Family Outcome."  287 children and their parents were given questionnaires focusing on gaming-, behavior-, and family-related issues.  The doctors concluded that co-op gaming did have a positive effect on girls.

The study was based off of research that touted the benefits of "co-viewing" television programs.  Basically, watching what your kids watch, with your kids, instead of letting the television babysit them.  This article would focus on the effects of parents "co-playing" games with their children.  One of the results of the study showed "co-playing video games with parents was associated with decreased levels of internalizing and aggressive behaviors, and heightened prosocial behavior for girls..."

The study took into consideration age-appropriateness of a game and the amount of time playing.  The children were aged 11 to 16 years old.  It was observed, unsurprisingly, that game preference was determined by gender.  Parents played Call of Duty, Halo, and Wii Sports with their sons, and Mario Kart/Mario Brothers, Wii Sports, and Guitar Hero/Rock Band with their daughters.  The results are interesting:

...this study is the ﬁrst to show positive associations for girls who play video games with their parents. In addition, results were based on measures from multiple reporters (parents and child) for all variables, potentially representing a more complete view of behavioral outcomes. Co-playing was not only associated with less negative and more positive outcomes for girls themselves, but girls and parents both reported feeling more connected with each other also, especially when playing age-appropriate games. As video games become more popular in the years to come, co-playing (at least with girls) may be one way to stay involved with adolescent activities and to negate at least some of the negative effects
of playing video games.

That's all I needed to hear.  Let's do this! My CoDBO wingman.  (I'm kidding. Like she has the motor skills necessary to be my wingman. No frick'n way.)

This is great news for the parents here at Co-Optimus.  Four out of the five fathers on staff have daughters. This study is proof that it is our parental duty to play co-op games with our daughters.  If any other gaming parents want to read up on the study they can find it here.

It should be noted that the results go on to show that video games have negative effects on boys, mainly "heightened internalizing and aggressive behavior and lowered prosocial behavior."  But anyone who has played any length of time on Xbox LIVE could have told you that.  It seems that co-oping games with sons makes little difference, since they play more on their own, or maybe teenage boys are just jerks. The study also made no determination as to whether it was dad or mom who made a difference. "We were also unable to determine who among the two parents, the child reported as being their co-playing partner (or whether the whole family was playing)." So get the whole family involved, and play some co-op games together.

Header image from The Telegraph UK.