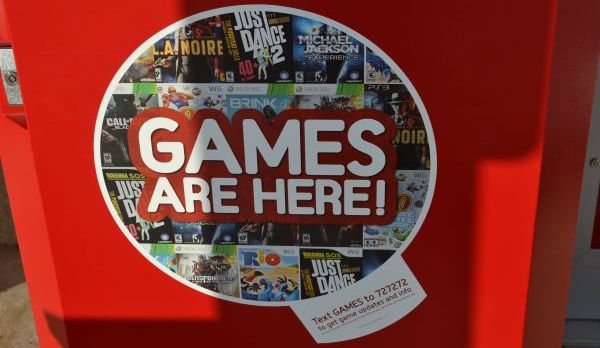 If you've ever rented a movie from a Redbox kiosk, you know that it's a boon for the budget-minded. DVD movies cost one dollar per night and are returnable to any Redbox kiosk. There are nine kiosk locations in close proximity to my house, and two more near my office. Snagging a newly released movie for the kids or for a stay-home date was never cheaper.

Eventually Redbox added Blu-ray movies as well, and now they've branched into games. For two dollers per night (plus tax) you can rent Xbox 360, PlayStation 3, and Wii games. Unfortunately, the game descriptions are minimal. The Cars 2 info screen - pictured above - was the closest I could get to determining whether or not the game had a co-op mode. It would have been nice to have seen some extra effort going into the games listings...but when all else fails, Co-Optimus has you covered with our free Android app and its database search function.

Not only is Redbox now a convenient and cheap option for gamers, but it provides another viable resource for the Co-Optimus staff to review even more games. (More on our review process coming to our behind-the-scenes blog series in the near future.) My experience with renting a game was smooth and quick. A receipt was emailed to me immediately, as usual. The benefit of renting games over movies is that currently there doesn't appear to be any special licensing required. Whereas DVDs are sometimes manufactured specifically for Redbox - without any special features whatsoever, and sometimes months after retail release - games are available the same date as retail, and fully featured.

You can see a full list of games offered and where to get them at Redbox.com/games.

Just remember that any games requiring a "full play" code that's only available in new purchases (similar to SOCOM 4, Battlefield: Bad Company 2, and Homefront) will be without these codes, since these copies are stripped of their packaging and manuals. The only bad part about renting from a Redbox? Waiting for the guy in front of you.