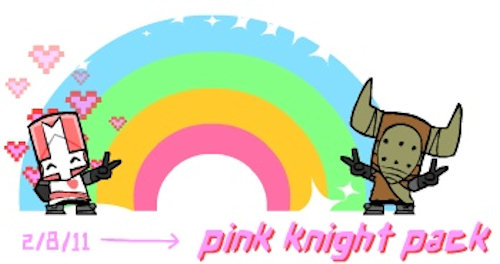 Pink is the new black

Castle Crashers is a firm Co-Optimus favorite, as well as a top selling download only game.  Its developers, the Behemoth, created a charming 4 player co-op game that was funny and great to play.  They also have a nice habit of still supporting the game over two years after release.

The latest DLC will come to PSN on 8th February and is in the form of the fabulous looking Pink Knight.  Personally, I think pink is a very manly color, especially if you happen to be holding a giant sword at the same time.  The DLC will cost $1.99 and will contain the Pink Knight and four new weapons.  To make the deal even sweeter, all revenue from the pack will go to Breast Cancer Research - a very noble cause for any knight to uphold.

XBLA users need not look on with too much envy at their pink PSN brothers; the Behemoth have hinted that the Pink Knight will become available on the 360 in a title update, along with some changes to the game itself.