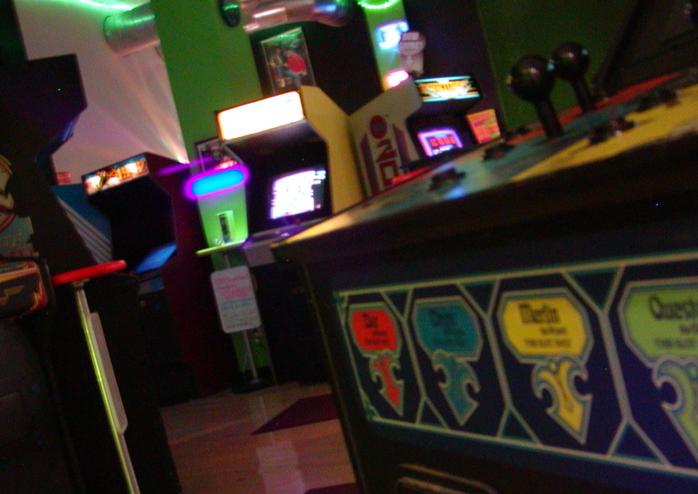 This week, Co-Op Classics is all about our trip to the 1984 Arcade.  Last week, we gave you a little preview, and now, the full report.  Which games hold up the best after 20 or so years?  Which are total clunkers?  Could I keep up with four 14 year old boys hyped up on soda pop and cheesburgers?  (The answer to that one: not really.)  Read on to find out! 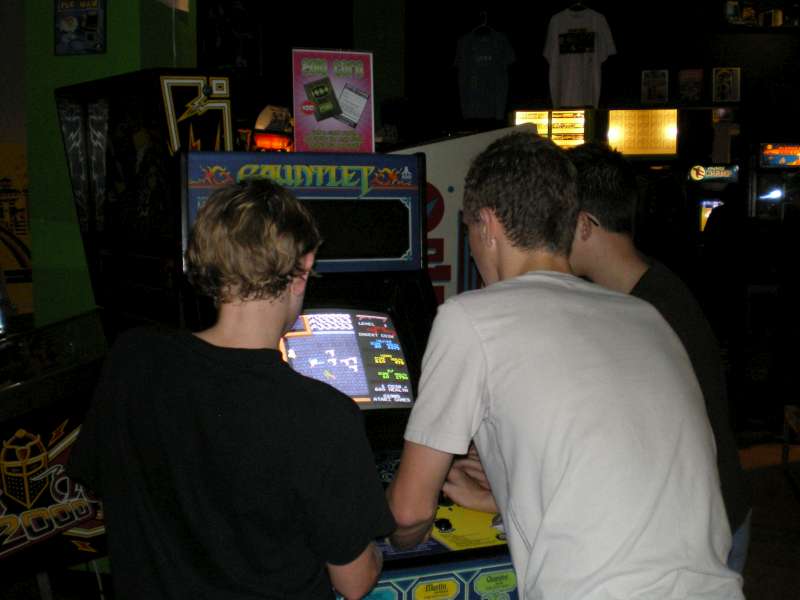 Gauntlet
As soon as you walk in the door, there it is: the mammoth 4 player behemoth of a cab, Gauntlet.  Unfortunately, this cab had a joystick out of order, so the poor Warrior was unavailable.  The boys played this one immediately, but the problem was, only three of them could play due to the broken stick.  Ah, so close but yet so far from total co-op perfection.  After around 15 minutes or so, they all wandered off, because some younger kids were watching them, clearly waiting their turn.  I can't say I blame them; the allure of black lights and all sorts of beeps and boops was irresistible.  As a side note, 1984 has added a second Gauntlet cabinet since my last visit.  The second Gauntlet was occupied by the same four people the whole time I was there (almost two and a half hours).  Yes, this game is just as good as you remember.

As I told you last week, I haven't played much Smash TV.  This week, it's no different, as the Smash TV cab was full every time I checked it out.  However, while I watched my son play a very old, but still awesome Pong clone (in a woodgrain cabinet), I couldn't help but observe the two guys on Smash TV nearby.  They were hooping and hollering and having a grand old time.  From what I could see of the action, I'd have felt the same way. 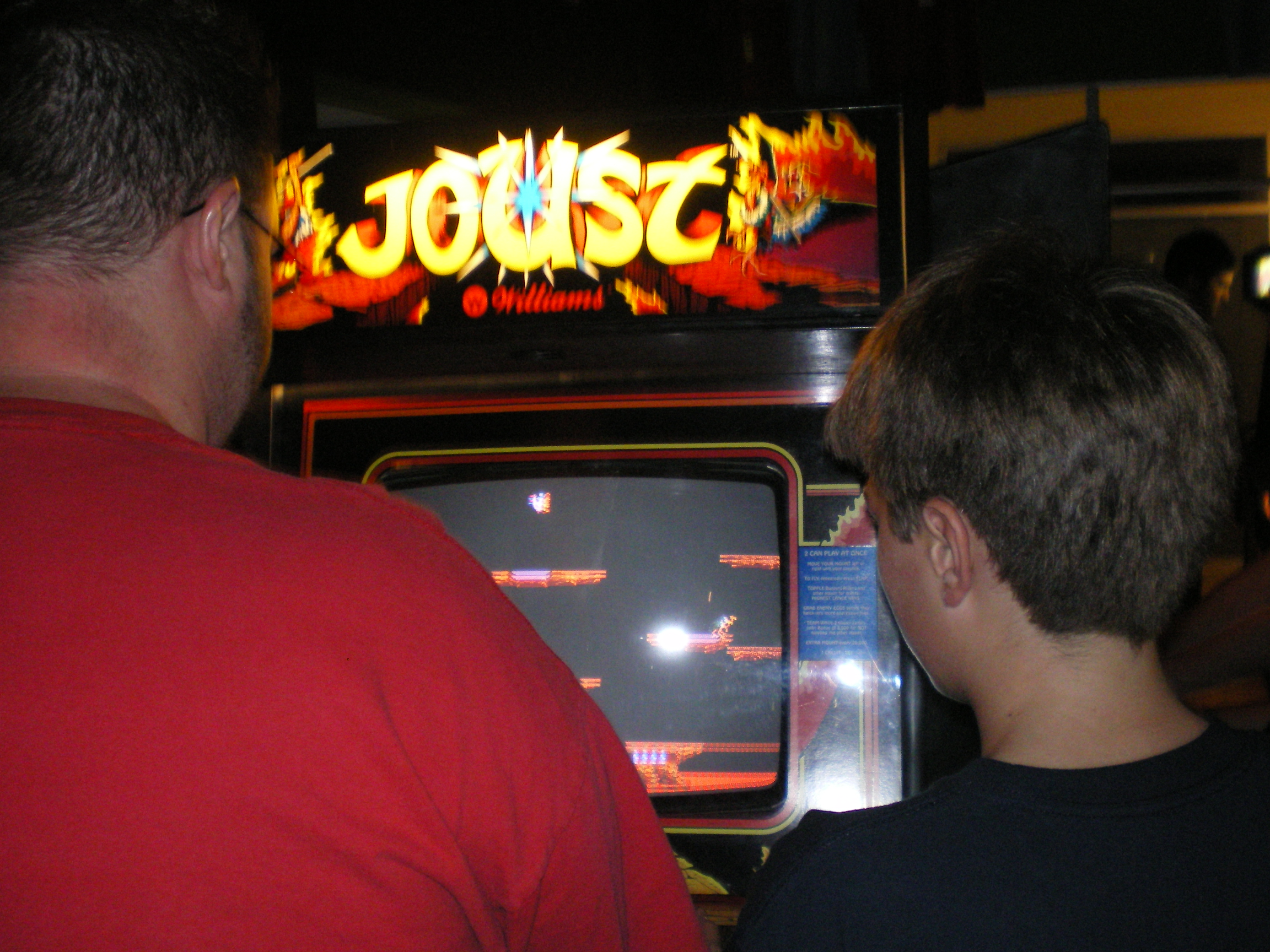 That's the back of my own very happy head in the picture above.  Joust was occupied for the first hour or so, but as soon as it opened up, I grabbed one of my son's buddies and we checked it out.  I was struck by how fast paced the game is.  There's so much to keep track of, it's hard to avoid your partner and poke the right guys.  However, the best part was how my young co-op partner reacted.  "Gotcha!" he exclaimed when he poked an enemy.  He growled when an egg, left uncollected, hatched a reborn enemy.  He laughed, though, when the ground disappeared and he fell into the lava.  Despite my pride, I must tell you he also "accidentally" killed me a time or two.  Or five.  It was very fast paced and hectic, but enjoyable to be sure.

I was really looking forward to this one, as the 19XX games have always been favorites of mine.  It seems like you used to see them everywhere, and they were quite popular.  However, imagine my dismay when I saw that this was a single player version!  It looked like an old Arkanoid cabinet that had been converted.  I played around with it for a bit myself, but lost interest after about 5 minutes.  First of all, that game is really, really hard (or perhaps my twitch skills are fading with age).  Secondly, and related to the previous point, you really need a wingman in this game to get very far.  Disappointing, but there were dozens of other games to choose from, after all. 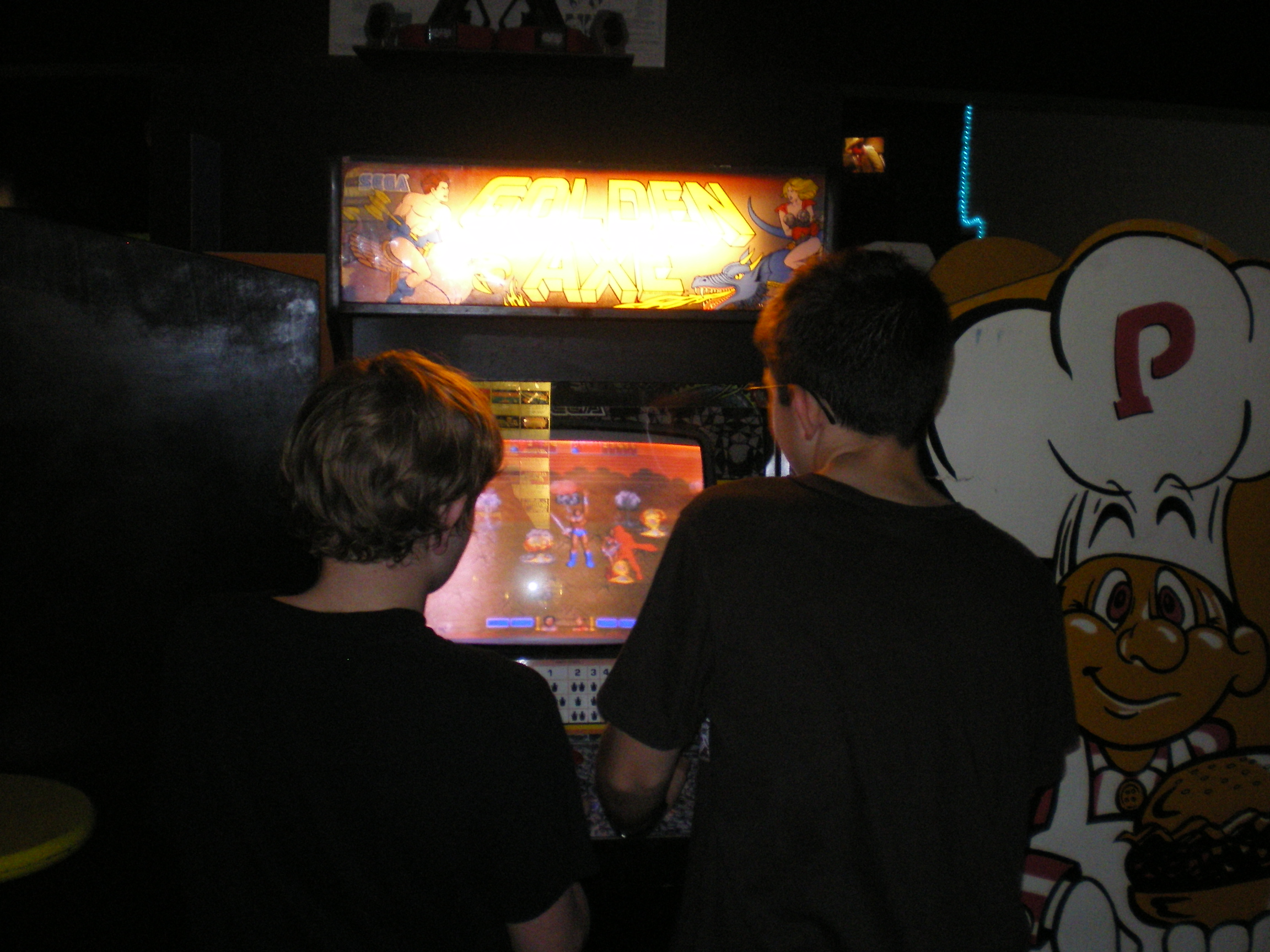 At one point or another, I think all four of the boys played this one together.  They tagged in and out so everyone had a turn.  I'd say for a solid half hour, they played it straight through.  I gave them some advice and tagged in as needed, of course!  Saving up magic potions to the maximum level and unleashing a screen full of fiery doom was quite a rush, and still impressive all these years later.  Flashy and addicting as this gem was, though, it wasn't the biggest hit of the night. 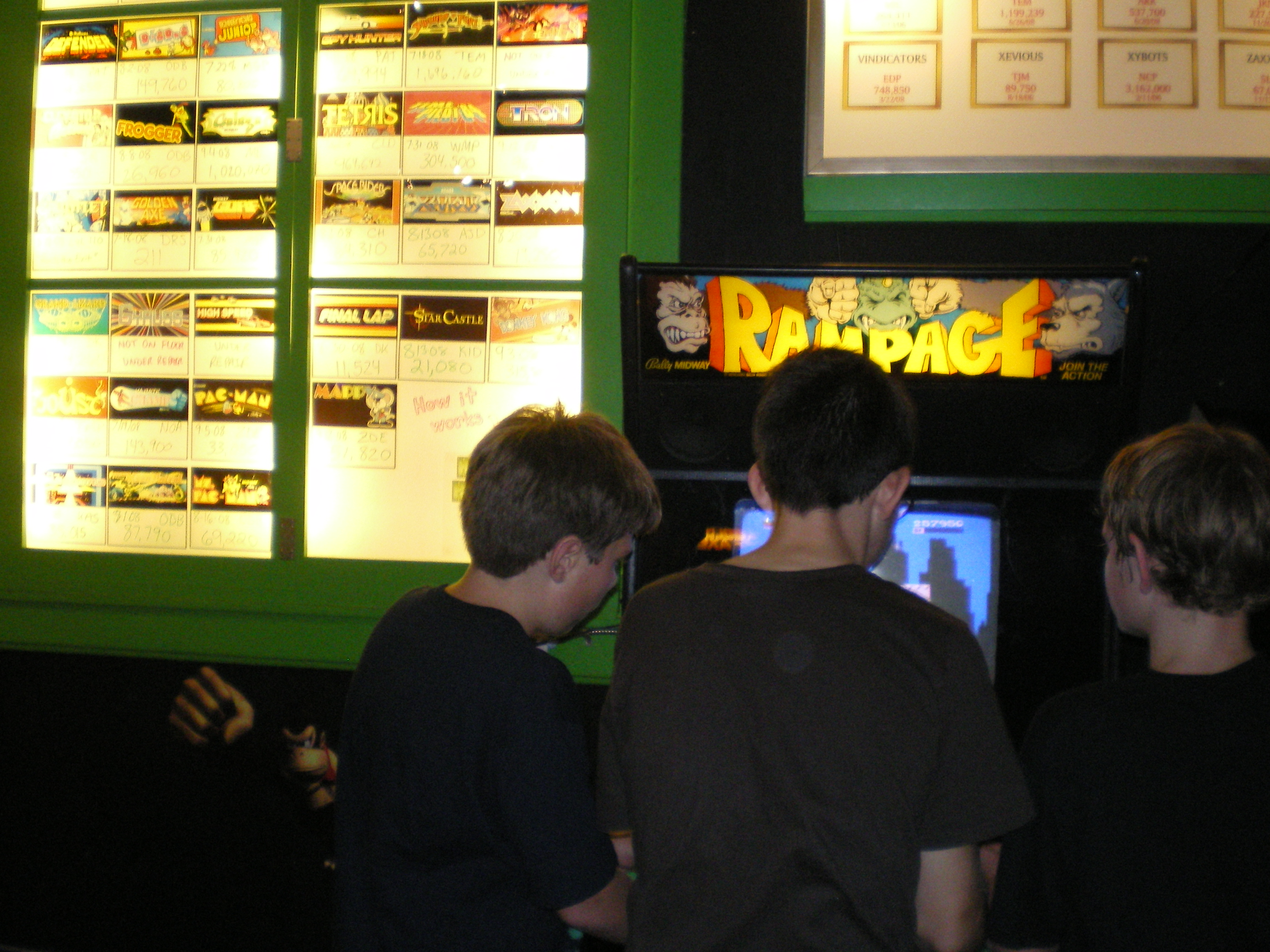 It should come as no surprise that the kids absolutely LOVED Rampage.  It's a real head turner of a cabinet, and the graphics are fun, with a nice cartoony feel.  Seeing your fallen giant ape turning into a little naked guy was funny when I myself was 14, and judging from the laughs, the boys felt the same way.  For almost an hour, the kids played Rampage, levelling city after city, breathing fire, stomping tanks, and munching on soldiers.  Rampage is located right next to 1984's High Score Hall of Fame, as seen above, and the boys were dead set on beating the record, somewhere around 2.5 milliion.  However, after playing about 45 minutes or so, the highest score was around 300,000, and it was nearing time for us to go.  One boy, though, said he'd buy coffee for everyone if we could just stay long enough to crack 1 million.  On a normal night I might have relented, but it was late, and I had given up on cracking the Hall of Fame score for Missile Command (right next to Rampage), though I did fill the game's high score list with my initials.

All in all, we had a great time.  I was quite impressed with the 1984 Arcade.  It was really busy, which goes to show you that even the golden oldies of gaming still appeal to people.  It wasn't just guys my age, either.  I'd say a good half of the forty or so who were there that night were teens and college students.  Plus, there were quite a few kids playing with their parents.  If you have the chance to go to an arcade like 1984, do it; you won't be sorry.  You might want to use the bathroom quickly, however... 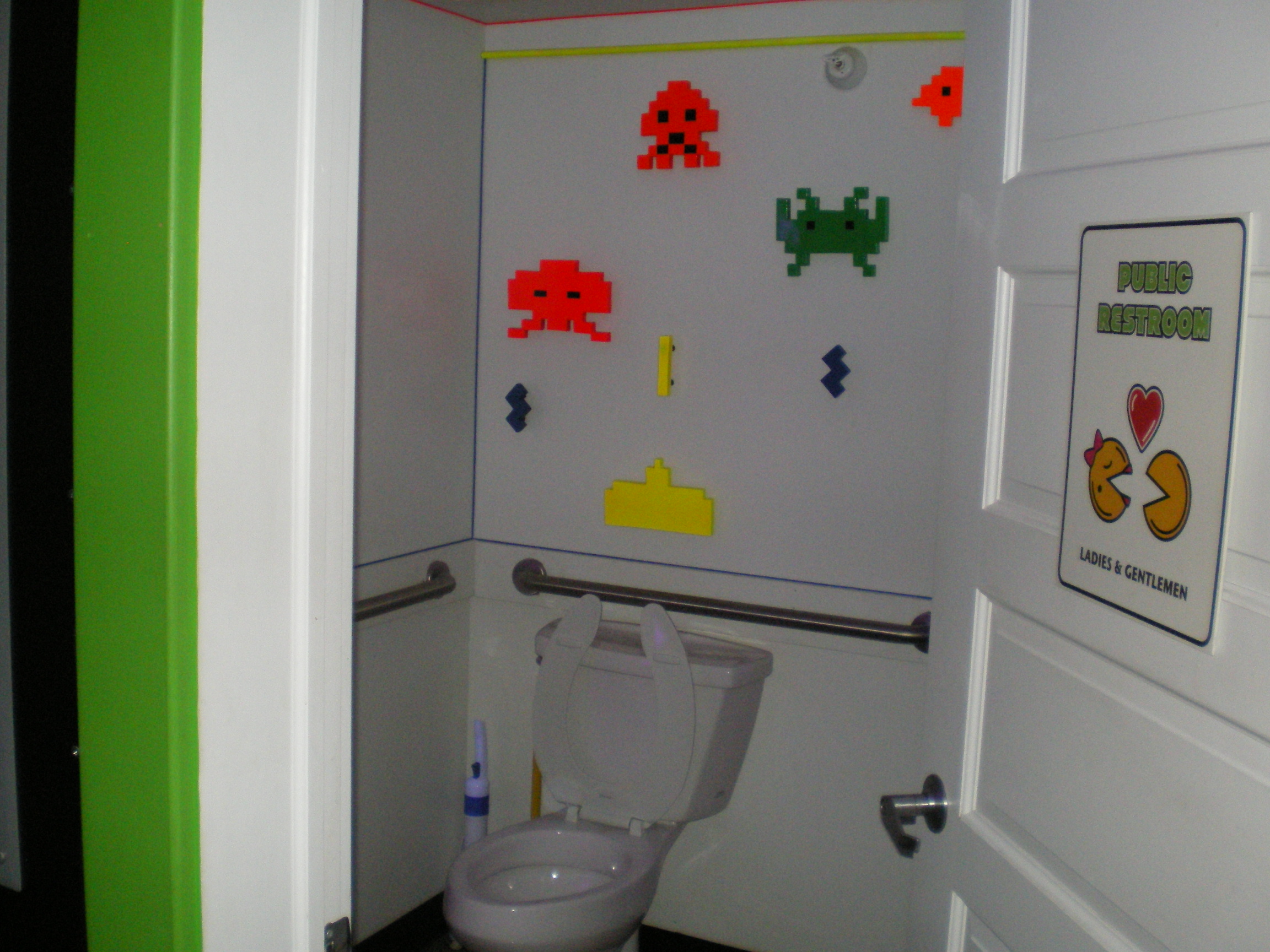