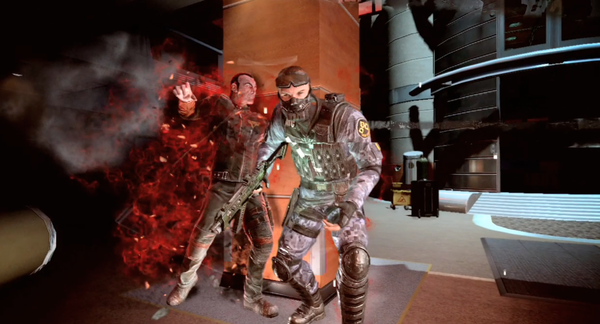 As the now May 2011 (delayed again) release of F.E.A.R. 3 creeps ever closer, we’re seeing a bit more information about the co-op that will either make or break the game for a lot of us. The one feature the co-op has that is unique to F.E.A.R. 3 is what is called “Divergent Co-op.” This just means you’re playing the game together, but the players go off on their own.

To some this means a bit more independence in the co-op, while others lament the lack of revive capability and being close to your buddy. Games.on.net interviewed one of the developers about the use of co-op, and what challenges and experiences players can expect when playing together.

Jason Frederick seems more than happy to give us some details on the divergent co-op mode, including why they still call it co-op, and the differences between the characters. This unique perspective on co-op gives the horror genre an original way to address the way you play games that are otherwise intended to be played solo.

Games.on.net asked for the scoop on divergent co-op, and how much it has to do with replay value in the game.

When developing F.E.A.R. 3, one of our main goals was to create a game that had high replay value, and our Divergent Co-Op model was a huge part of that. For the most part, the content will remain the same, but you’re really forced to play the game quite differently depending on which character you’re using. For example, when playing as Point Man, you’ll get the classic F.E.A.R.-style game play that fans of the series have come to expect. You can take cover, use slow-mo, and run-and-gun your way to victory.

Fettel is a decidedly different beast. He is weaker than Point Man in some ways, especially without the slow-mo ability, but he comes with his own advantages as well. In his ghost form, you can suspend one enemy while attacking another with his energy blast. Fettel can even suspend explosive objects and toss them at groups of enemies who otherwise would not have been in danger if you were simply playing as Point Man. Fettel also has some different (albeit very satisfying) melee abilities as a ghost, including one that decapitates your foes. But the real key to Fettel’s success is his capability to possess enemy soldiers and then gain the enemies’ abilities to use in combat.

However, to add to the extended gameplay mentioned above, another interview with Eurogamer specifically points out that:

This is the first attempt at bridging the gap between single-player and co-op like this, and it’s something that horror fans (such as myself) should really look forward to. Being built around co-op also offers unique opportunities for special abilities that still give a co-op feel in F.E.A.R. 3. Games.on.net asks specifically how many co-op abilities will be available between players.

While I can’t reveal all of them, there is one ability that is really fun and exciting, and highlights why communication is so important when playing F.E.A.R. 3. Fettel has a special melee attack that only occurs when Point Man has slow-mo activated. So if you find yourselves surrounded by enemies, tell Point Man to activate slow-mo. When Fettel hits his melee, he unleashes a devastating thunderclap that destroys everything around him.

One of the most intriguing parts of this development process is watching people sit down and play the game for the first time, and then begin doing things in Co-Op that we never thought of or intended. It’s this sort of emergent game play and discovery that I think makes Co-Op really fun.

We’re also looking forward to the unlikely alliance between the ghost form of Paxton Fettel and Point Man from a storytelling perspective. Keeping the horror alive, keeping tension high, and generally doing it with a common enemy should be a very interesting game story to play through.