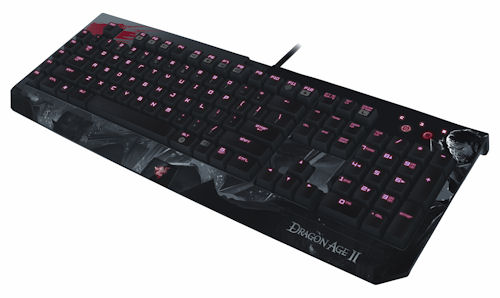 We get a lot of press material regarding computer and console accessories and hardware. Some of it is co-op related, some if it is just generally cool. We're all gamers and geeks so its hard not to oggle at some of these sexy devices.  Here's the latest list of hardware that excites us around the Co-Optimus HQ.

Razer have announced a handful of Dragon Age 2 themes accessories for the PC and Xbox 360.  Pictured above is the Razer BlackWidow Ultimate Dragon Age 2 edition.  This keyboard features full mechanic key action, blood red lit keys, and on the fly macro recording.  It'll set you back $139.99 but you may never have to buy another keyboard again.

On the gaming mouse side of things, Razer DeathAdder Dragon Age 2 edition.  The mouse is identical to the others in the DeathAdder lineup, except this time its adorned DA2 colors and emblems.  That means 3500DPI with 1000Hz polling.     Cost is $69.99.

Finally we have an Xbox 360 controller in Razer's lineup - the Dragon Age II Razer Onza Tournament Edition.   This wired controller comes with adjustable resistance analog sticks, two fully programmable buttons, and backlit facepad buttons.  It'll set you back $59.99 - but the dragons don't stand a chance if you use it.

The Fierce Laser V2 mouse from Rude Gameware has gotten an upgrade from its predecessor and the new version of it looks really slick.  The mouse features onboard memory profiles, a weighted design, and 5000DPI resolution.  Here's the specs:

Features of the Fierce Laser Gaming Mouse v2 include:

The mouse is $49.95 and is available from Rude Gameware's site. Antec is one of the oldest PC case manufacturers in the business, but now they are entering a different PC market.  Today they've unveiled a new set of stereo speakers that promises realistic surround sound from only two speakers and a subwoofer.  Called the soundscience rokus 3D | 2.1 Speakers  (yes, thats its real name) - here's the specs

• Total output of speakers is 150W, with each satellite delivering 25W and the subwoofer producing 100W, comparable to larger footprint subwoofers

• Frequency response is 10Hz to 20kHz The new SteelSeries head called the Siberia V2 is actually compatible with not only the PlayStation 3, but your PC, 360 and many other devices.   It features 50mm driver units, leather earcups, and a retractable microphone system.  There's an inline AudioMixer that has independent volume controls and also features SteelSeries’ LiveMix™, which now provides gamers with four levels of settings that can be used with PC, Mac, PS3 and of course, Xbox 360 gaming.

You can read more about it on the SteelSeries website.  I should also mention that SteelSeries is having a 10 year anniversary celebration, so definitely hit up their website to look for some great prizes and info.