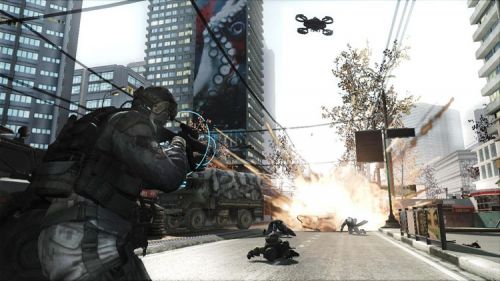 Happy first lunch break of the week, CST people! I hope you brought enough to share with everyone. Let's get our Co-Op Release Alert on!

Dungeons & Dragons: Daggerdale (PSN) I know what you're thinking, "Didn't this game come out last year?" Don't worry, you're not hallucinating (as far as I know). Yes, the hack and slash dungeon crawler hit the XBLA and PC last year. Now it has finally made it's way to the PSN. 2 player local co-op, 4 player online co-op

Ghost Recon Future Soldier (PS3,360)  This third-person shooter features all the bells and whistles that any virtual soldier could ask for: advanced combat technology, several multiplayer versus and co-op modes, as well as a gunsmith mode which will allow you to exercise your weapon customization OCD to near nauseating levels. 2 player local co-op, 4 player online co-op

Doctor Who: The Eternity Clock (PSN)  Save the universe and all of space and time as Dr. Who and River Song. There's a sonic screwdriver. Do you really need to know anything else? 2 player local co-op

Here, as they say, are all the rest. These are the retail games coming out this week complete with Amazon links. If we missed something, be sure to let us know in the comments section!