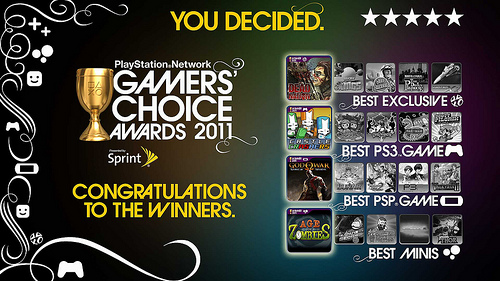 Awards season is over... or starting... or we're in the middle of it.  No one really knows, and no one really cares. We do care about the PlayStation Network Gamer's Choice Awards 2011, though. Why, you ask?  We'll tell you why.  The titles that win these awards go on sale to kick off Sony's Spring Fever Event.  So if you don't have Dead Nation, Castle Crashers, God of War: Ghost of Sparta, or Age of Zombies, now is your chance to pick them up for 30-50% off.

Dead Nation and Castle Crashers are both excellent co-op games, each earning Co-Optimus Co-Op Review scores of 4 out of 5.  The PlayStation community must have good taste as well.  Dead Nation won the award for best Best PlayStation Network Exclusive, while Castle Crashers won for Best PlayStation 3 Downloadable Game.  Single player games won out  in the other two categories.  God of War: Ghost of Sparta won the Best PSP Downloadable Game.  Best PS3/PSP mini went to Age of Zombies.

Here's the great news, oh purveyors of the PlayStation Network.  All four of these titles are on sale until March 14th. The games will be 30% off to regular folks, while PlayStation Plus Members can pick up the games for 50% off.  The more you spend the more you save!