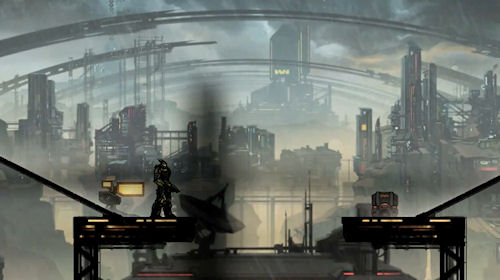 Moonshot Games is a brand new developer on the scene,  a studio formed by folks from Bungie studios that worked on Halo titles - including Michel Bastien the lead producer of Halo 3.  Today they've announced their first project called Fallen Frontier.  It's a 2D platform shooter set on a colony on Alpha Centauri with a beautiful hand drawn style.

The video reveals a game that looks part Bionic Commando and part Shadow Complex.  There's a strong sci-fi setting that surrounds a tale of revenge and the atmosphere set in the short trailer is amazing.  Best of all - we see a two player co-op mode that utilizes the smoothest looking split screen transition we've seen to date.  It's a bit like the split screen transitions found in various LEGO games, but even tighter.

No platforms have been officially announced, though the team wants to release the game on XBLA, PSN and Steam.  According to the website it's "up to the publishing partners."  If you're headed to PAX East this weekend, Moonshot plans on having a booth, so swing on by and maybe get some hands on time with the game.