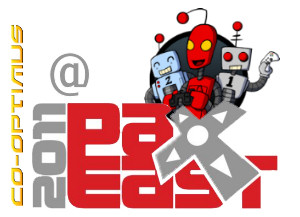 Heading to Boston this weekend for the 2011 PAX East Expo?  I hope you have a ticket, because according to the official PAX Twitter account the expo is sold out.  With 60,000 expected attendees, exhibitors and media on hand it's going to be quite the affair at the Boston Convention and Exhibition center.

Don't worry if you can't attend - the Co-Opticrew will be there bringing you all the co-op coverage it can muster up.  Titles like Lord of the Rings: War in the North, Earth Defense Force: Insect Armageddon and even the recently announced Fall Frontier are all on our schedule.  We'll have news, pictures, impressions and interviews all through the weekend.