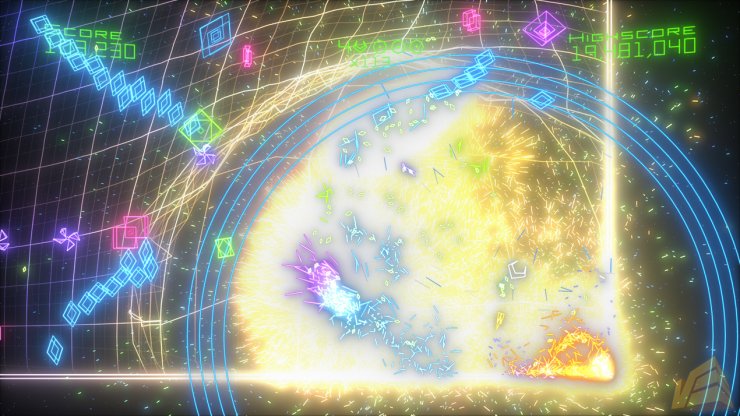 I have stated many times my love of Geometry Wars Retro Evolved 2. It's a great game for both single player and cooperative experiences. Indeed, I've had Geometry Wars RE 2 as my co-op game of the week once before. However, until recently, I've not dumped a large amount of time into the game. I've played it for small bursts, but not really enough to truly appreciate it. Well fortunately I had a dull week and a roommate willing to try some Geometry Wars.

I play Geometry Wars and Castle Crashers on a nearly daily basis, but just for a little relaxation, like 5 to 10 minutes. However, this week my roommate and I spent a solid half hour (a few times, too) figuring out what we liked about the game so much. Well, we came away with a great deal of info and opinions, most all of them rather glowing.

Bad news first: Pacifism mode is extremely difficult in co-op mode. This was rather saddening, since I loved the mode in single player mode. However as my roommate and I discovered, maneuvering two ships through the gates (the only way to destroy enemies) was very hard. This is mainly because there are a TON of enemies, and adding another ship to the already hectic mix that is Pacifism is just frustrating.

However, as long as we didn't play Pacifism, we had a boatload of fun. My roommate was actually enthralled with the music and graphics of the game. In fact, that was his favorite part. He'd always say things like "I mean, the game is great, but the colors are just..." But oddly enough, the music and graphics in the game actually have a co-op impact. That impact is that it produces an environment where having fun with your buddy (or buddies) is extremely easy. My roommate and I had boatloads of fun, even though I'm good at the game and he only picked it up.

King mode requires the most teamwork, a fact anyone will discover just a few seconds into the mode. I mean, when you have to jump from safe zone to safe zone (and cannot fire when outside said safe zone), planning is key. Almost immediately, though, we discovered a great technique to do quite well at the game. We would both enter different safe zones, at different times. This resulted in my teammate leaving a zone while mine was still active, and vice versa. This gave the both of us covering fire as we drifted from zone to zone. To be honest, I was amazed how quickly we both discovered this strategy, which worked quite well.

My roommate would agree with me that Waves was the most heart-attack inspiring mode. This was also the mode where we saved ea taking  ch others butts the most. When there are waves of enemies flying right at you (sometimes up the whole of the screen), miracles often happen to survive. I often marveled at just how exactly my teammate survived what seemed to be fatal attacks. I also couldn't count the number of times I saved him from sure death, and vice versa.

The meat of our gameplay and fun was divided between Deadline and Evolved. However, considering the two modes are nearly identical, and we loved having unlimited life, I will focus on Deadline. The mode was my roommate's favorite, as well as mine. The fact is that this one mode was the core of what made Geometry Wars RE 2 a great co-op experience. The mode is colorful and quirky, with a billion enemies, yet still remains fun and not too difficult. The time limit was also rather nice, since by 3 minutes, you can get swamped pretty severely. However, the best part was just the fact that we didn't need to worry about dying and could just chill out and have some fun. We trash-talked each other while protecting each other's backs and made fun of each other when we died. It was really a great feeling, since we had no fear of death, and yet still had fun and a feeling of accomplishment.

I'm glad that I went back to Geometry Wars RE 2 and gave it some serious attention. I not only noticed how epically beautiful it is, but also how great the music is. Oh, yeah, and I discovered one of the simplest and purest takes on co-op. If Geometry Wars nails one thing really well, it's the way it takes co-op and makes it simple yet satisfying. You don't have to dump a ton of time into it, but if you do, you might discover something amazing.