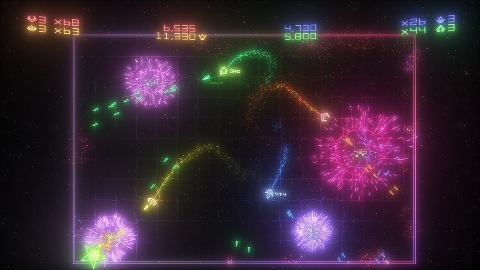 When the first Geometry Wars took the Xbox Live Arcade by storm, I was instantly addicted.   But above and beyond all the time and effort I put into my score, there was one thing missing: co-op.  Thankfully there's Geometry Wars: Retro Evolved 2, the sequel to the aforementioned title.  The folks at Bizarre Creations have kindly put in a very flexible offline four player co-op system. Geometry Wars has always been about high scores, and the new game puts quite a bit of focus on this.  You'll find all of your friend leaderboards directly on the mode selection menu.  There are six modes in GW2, all available for co-op play.  Each mode can be played in one of two ways; in wingman each player has their own ship to control, while in co-pilot one player controls the movement while the other controls the shooting.

Deadline: You and your buddies have 3 minutes to rack up the best score you can achieve.  Multiplier is shared, and there are no bombs. King:  In King mode players can only shoot when they enter the circles, which then immediately begin to degrade and disappear.  Luckily enemies can not enter the circle.  Each player only has one life. Evolved:  This is the "classic" mode in Geometry Wars.  Play forever if you can, players share a pool of lives and the multiplier.  No bombs. Waves:  Waves was adapted from GW: Galaxies.  Lines of enemies spawn on the sides and move across the map in formation, eventually spawning faster and faster.  Each player has only one life. Pacificsm:  This mode was adapted from an achievment in the first game,  you can't shoot (so no co-pilot option) and must avoid enemies at all costs.  There are spinning gates you can go through that explode to kill enemies.  One life per player. Sequence: Make your way through twenty set piece levels.  If you die, you fail the level.  If you don't kill everything in 30 seconds, you fail the level.  Players share the multiplier and pool of lives.

Everyone one of these modes were a blast to play co-op, though I especially liked Deadline and Sequence.  They just seemed to flow and mesh well.  Sequence especially with it's set piece gameplay allowed for a bit of co-op strategy on the levels.  There is a downside to all this though, it's the fact that the co-op isn't online.  Bizarre has sited technical limitations with the sheer chaosity of what is going on onscreen.   The other downside is there are no co-op specific leaderboards online, only locally.  In a game so focused on scoring this was pretty odd to see.  Both of these issues aren't dealbreakers, but they are a disapointment, especially when the game is so close to perfection.

Geometry Wars: Retro Evolved 2 has once again set the bar for Xbox Live Arcade games, the game simply defines what it means to be an arcade title.  It's fast, simple, fun to play and all about the better score.  There is simply no excuse NOT to own this game.  The king of arcade shooters is back, and it's back with co-op.