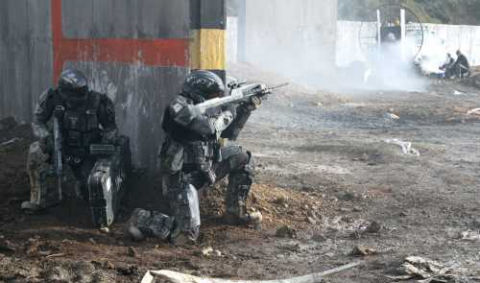 There's been a long rumor that Bungie has been working on a squad based shooter, much like Ghost Recon, set in the Halo universe.  Yesterday's teaser announcement and subsequent video trailer could be further proof.

Social site Kwanzoo has an article up from a user that presents evidence supporting the theory of a co-op squad based add on.  Among the most obvious evidence is the "Prepare to Drop" tagline, referring to the drop pods that are seen during the video.  These drop pods would be used by an elite squad of soldiers.  The user also points to a few posts on Bungie's site that support the co-op squad based element.

In this message, it becomes clear that the Covenant Loyalist invasion of Earth is well underway. Someone from the Office of Naval Intelligence is requesting a specific squad of men from the heavy cruiser Say My Name. (They sure do have weird names for ships in the human fleet.)

Make sure you hit up the original article for a more detailed explanation.  The only thing that doesn't fit for me personally, is the video makes it look like the pods are an invasion, not just a small squad dropping for deployment.  Whatever the "Keep it Clean" trailer showed, it's still a mystery, but obviously we are pulling for co-op!