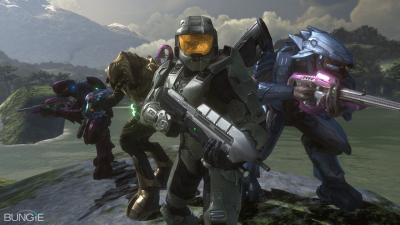 This past week, our corner of the world (Southwest Missouri, USA) was hit by a pretty nasty ice/snow combo.  Our school was closed, which meant that my whole family was "stuck" at home for four straight days.  Don't you feel bad for me?  As you can imagine, there was a lot of video gaming going on.  The first priority was finishing off the campaign in Gears of War 2.  However, we did that on the first day (and it was awesome, for sure).  So, digging through the game drawer, we came upon another game we had only half-finished: Halo 3.  And so, taking on the role of "Master Halo and the Alien Guy", as named by my seven year old, we embarked on the co-op quest.

You might be wondering how any self respecting gamer hasn't finished the fight by now.  Well, let me explain.  First of all, I'm not sure how respectable I am as a gamer anyway.  Second, anytime we played Halo 3 before, I got weird motion sickness and splitting headaches after playing for about half an hour.  For some reason, the game didn't affect me as much this time around.  Maybe I'm just getting used to shooters, what with all my time spent in Left 4 Dead and Gears 2.  Headaches or not, Halo 3 was the answer for keeping the snow days from becoming boring. We fired the disc up and started where we left off.  Our first experience was a long, totally confusing cut scene.  The story of Halo 3 is a bit of a headscratcher anyway, and when you consider that we never played the first two Halo games, and it had been at least six months since we'd played this one, too, it's no wonder we were lost.  It didn't hamper our enjoyment of the game though.  Quickly, we figured out it was as easy as "follow the squadmates, shoot anything that moves".  That may be simple, but it was indeed enjoyable.

The feeling of co-op in Halo 3 is quite strong.  Moving back to safe areas to allow a fallen partner to revive felt much like helping a fellow survivor in the aforementioned Left 4 Dead.  My son and I used some of the same flanking maneuvers to destroy the Flood that we had found effective in Gears 2.  Halo 3 is a great example of what modern FPS do right, especially when you compare it to the shooters of yesteryear that I played (way back in the dawn of time).  Regenerating shields make the game far more forgiving, certainly something I appreciate.  And the default weapon is still a pretty good one; it feels powerful, even when compared to guns that are likely better, like the Needler.  Lousy weapons provided on respawn are one of my personal pet peeves. On to the experiences then.  One of the biggest hits of the entire game was taking down the first Scarab.  Even though we had taken over a sweet tank with a huge cannon, the Scarab was intimidating.  To take it out, we had to split up and coordinate our efforts in true co-op fashion.  I stayed with the tank, firing at the huge behemoth's knees, while my partner went inside the belly and took out the core.  A ginormous explosion was our reward, and the high fives were plentiful.

But if taking out one Scarab using a tank was fun, try taking out two while piloting a flying machine!  The Hornets are really exciting to use.  We felt like Snoopy as the Red Baron while flying around and shooting missiles everywhere.  Using these great vehicles to destroy a pair of hulking Scarabs... ah, I get a smile on my face just thinking about it.  This whole battle was probably the most enjoyable in the whole game for me.

If there was one blemish on our experience with Halo 3, it was the ending.  For the entire last section off the game, you are driving through a series of exploding platforms.  It really felt out of place compared with the rest of the game.  The worst part was that it was largely a test of driving skill, and the enemies could be ignored.  Being the gunner for this section was quite frustrating.  All told, though, Halo 3 is a solid co-op experience, and it made our days stuck at home a fun experience.  Who knows?  Maybe I'll track down a copy of the first Halo and check it out sometime...  After Halo Wars, that is.