It's no secret that I am a comic book superhero fan.  Superhero games, then, are usually quite enjoyable for me.  Lego Batman came out just this past week; we picked it up, and love it.  Over the summer, for a Co-Op night, Marvel: Ultimate Alliance was the game of choice, and I was happy.  Way back in the first Co-Op Classics, we looked at my all time favorite, X-Men: The Arcade Game.   This gem of a game was even mentioned in the most recent Co-Opticast.  Today, we'll dig a little deeper for a title that wasn't quite so memorable, but was still a favorite of mine: Captain America and the Avengers.

When I was growing up, I was a bit of a Marvel zombie.  Batman and Superman were just not my cup of tea, and the Marvel books were just way more interesting, during the 80s, at least.  I collected and still own large runs of Iron Man, Thor, the Avengers (East and West Coast!) and all the crossovers I could get my hands on.  So, one day back in 1991, when I saw this brand new arcade game, I just about freaked out and ran to the change machine. 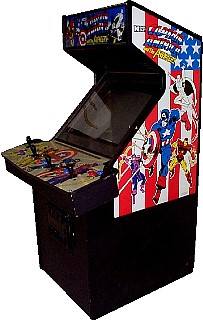 The gameplay is pretty much what you would expect.  Choose a hero, beat up a bunch of little bad guys, and then face a cheap boss who would require way, WAY too many quarters to defeat.  Up to four people could play at one time, teaming up in typical Avengers fashion to rid the world of evil.  I have to question the designers choice of characters for this game though.  Let's take a closer look.

Captain America: the pinnacle of Golden Age heroism.  The Sentinel of Liberty, decorated World War II veteran, longtime leader of the Avengers, and the wearer of what is quite possibly the greatest costume of all time!  He threw an indestructible shield with pinpoint accuracy; his body was at the peak of human athleticism, and he was the greatest hand to hand fighter in the world.  Yeah, it'd be okay to play as him.

Iron Man: the Golden Avenger.  Incredibly wealthy, intelligent, plus he got all the chicks.  His suit allowed him to fly, lift mountains, and shoot repulsor beams that could level a building.  All the while, the red and gold suit never got scuffed or dirty, always gleaming bright.  Sure, he's awesome, grab some tokens.

Hawkeye: the wisecracking archer.  He was the best ever with a bow and arrow.  Trick arrows allowed Hawkeye to keep up with far more powerful heroes.  His wit and humor always made him a favorite of mine, and he too was the leader of the Avengers for quite some time, with a snazzy purple and blue costume to boot.  Iron Man got all the chicks, sure, but Hawkeye's wife was a superhero hottie: Mockingbird.  You could do a whole lot worse than playing as Hawkeye, no doubt.

And finally, the Vision.  Yes, him.  Or more accurately, it.  An android created by totally evil robot Ultron, who turned into a good guy.  He married the Scarlet Witch, and they had kids via sorcery, or something, but then, they didn't have kids.  (It's complicated.)  He did have cool powers: density control, super strength, flight, and he could also shoot a laser from his forehead.  He had a decent costume... well, at first, anyway.  Unfortunately, for a few years he had one of the plainest, most boring designs for a set of heroic longjohns you'll ever see, and sure enough, it's in the game.  Basically, if you were the fourth guy, you were stuck with the Vision and his pale yellow fairy godmother looking suit.

How does the Vision get the fourth spot in an Avengers game?  Thor, God of Thunder, wielder of Mjolnir and a kickin' helmet, not represented.  The Hulk, gamma irradiated goliath, strangely absent.  Wonder Man, pretty much exactly what his name sounds like?  He makes a cameo, that's all.  Seriously, even Doctor Strange would have been a better choice, at least he could say "By the Hoary Hoards of Hoggoth" or some such.  But, we got stuck with the android.  Nice choice, fellas.

Aside from the questionable character choices, the game plays fairly well.  You have your standard punches and kicks, plus ranged attacks.  The environment is wonderfully destructible, and tossing soda pop machines, tires, rocks, and wrenches never gets old.  (It is odd to see Iron Man throw a rock as a weapon, for sure.)  A decent variety of standard enemies populate the levels, many of them using different tactics like flight, shields, etc.  Besides the beat 'em up stages, there are also some side scrolling flying/swimming levels.  Iron Man and Vision can fly naturally, of course, but Cap and Hawkeye hop on some nifty flying cycles.  It's comical to see Iron Man shoot repulsors like crazy, and next to him, Captain America tosses his shield just as fast, several different shields shooting out one after the other.  Also, Hawkeye shows he is seriously fast on the draw: pew pew pew pew pew.  Comic book style sound effects like BLAM and WABOOM appear on screen from time to time, which adds to the cheesy enjoyment. 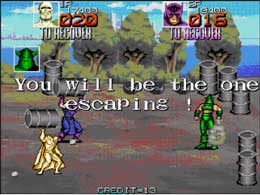 Speaking of cheese, I must mention the translation.  Let's just say it leaves a little bit to be desired.  Similar to the X-Men arcade game's "Welcome.. to DIE!", there are several real gems of weird dialogue.  Close to the beginning of the game, the team faces the Living Laser and Klaw.  They warn "Don't Disturb Us!"  Our heroes' reply?  "Why should it goes well"!  Eh?  When the Avengers face Whirlwind at the end of the first level, they yell "You cannot escape!"  The villain responds, "You will be the one escaping!"  I have no idea what that even means.  Also hilarious is the voice acting.  The Mandarin yells out "See myeee powaaaaahhhh!" before his big fight, in what most be the most over the top voice you'll ever hear.

I was quite surprised to see a giant robot show up in the second level, that looked exactly like a Sentinel from the X-Men comics, yet called be the uber descriptive name, GIANT ROBOT.  I suppose none of the Avengers' giant robotic foes were available?  But the single greatest "huh?" moment is in the undersea level.  Our heroes face off against an enormous, octopus shaped robot, with tendrils and weapons all over the place.  It's quite the fight, I assure you.  And what is the name of this monstrous creation, this unstoppable behemoth of bionic doom? MECH. TACO.  You can't make this stuff up, dear reader. 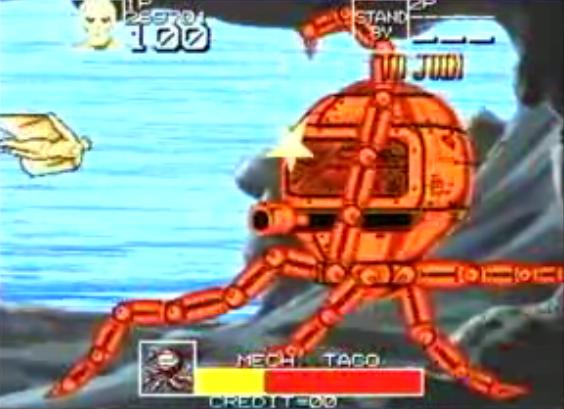 My biggest beef with the game?  No Doctor Doom!  He's the greatest villain in the Marvel Universe, in my opinion, and yet he is totally absent from the proceedings.  Instead, the big bad guy is the Red Skull.  I know he has a history with Cap, and that nowadays he's quite the mastermind, but as far as being a serious threat to the Avengers is concerned, he comes up a bit short.  The last boss fight, against a tall mechanical Red Skull, is a bit anti-climatic.  He shoots bullets that actually manage to hurt the heroes.  Yeah, Iron Man's armor, Vision's density control, Cap's shield, none of them can block simple machine gun shots.  Can you say "Lame!"  Get Victor Von Doom in there, I guarantee he'd be a better final fight all by himself, just play through the Marvel Superheroes fighting game sometime and see.

All in all, Captain America and the Avengers was a very good co-op game.  The Avengers are all about teamwork, after all, and seeing all the obscure Marvel villains as bosses was quite enjoyable.  It's a good thing this came out before the X-Men game, though, or it'd have failed miserably, as the X-Men title is superior in almost every way.  Except cheese, I guess.  If you have the chance, you should certainly check it out.  Just hope you're not stuck playing as the Vision!