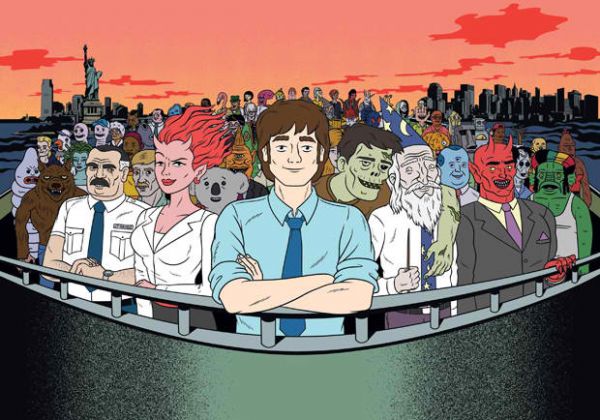 Comedy Central's Ugly Americans is getting a video game treatment.  The animated series focuses on a social worker for the Department of Integration named Mark Lilly.  Set in New York City, the series focuses on Mark's interactions with NYC citizens, most of whom are some form of monster.  Mark narrates the episodes, which use thinly veiled metaphors and allegory to get the point across, something akin to Zach Braff's summation at the end of an episode of Scrubs.  I've actually seen a few shows and it doesn't totally suck.  It doesn't blow my skirt up, either, but I stopped wearing skirts after college.

The game version of Ugly Americans will reportedly be a four player co-op side-scrolling shooter.  No word on whether it will have local or online co-op, but the smart money is on local only.  A character roster hasn't been announced, but I'd wager a guess that the playable characters will include Mark, his zombie roommate Randall Skeffington, his office fling and demonic boss Callie Maggotbone, and co-worker/wizard Leonard Powers. It will also be written and voiced by the staff of the show, so if you like monster sight gags with an air of preachiness, this is the game for you.

Ugly Americans was good enough to get a second season, so that puts it in like, the 99th percentile when it comes to a Comedy Central show.  It could be worse.  When I heard "4 player co-op" and "Comedy Central," I figured it would just be a game where you play as one of the countless stand-up comics with a failed Comedy Central Show.  You would then be tasked with beating Daniel Tosh in front of a green screen while random Break.com clips play.  Ugly Americans: Apocalypsegeddon will be released on the PSN and XBLA in August to coincide with the TV show's second season.  It will cost you $10 or 800 MSP.