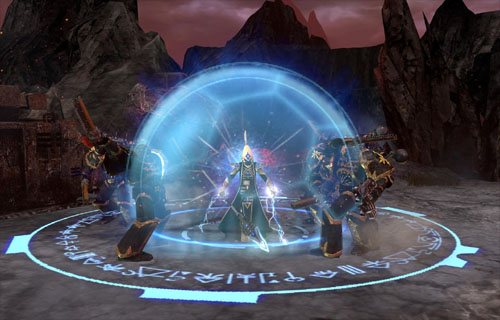 Do you love survival modes in an RTS setting? Or do you really love heroes in RTS games and would rather focus on playing a hero instead of micro-managing units? Or do you love the idea of DoW2: Retribution, but gosh-darnit, you have two other people you want to play with, not just one? If you answered "yes" to any of the above questions, then great news! DoW2: Retribution's the Last Stand Mode, the mode that focuses exclusively on co-op, is now available as a stand-alone game for just $9.99 on Steam. This is the mode where you and two other friends try to outlast waves and waves of enemies, each of you only controlling one hero. As you progress in levels, you receive new equipment for your heroes. A recent update also added new achievements to this mode which also unlock new gear. We're big fans of the Last Stand around here, and Mike and Jason even recently did a This Week in Co-op on the DoW2: Retribution flavor of it.