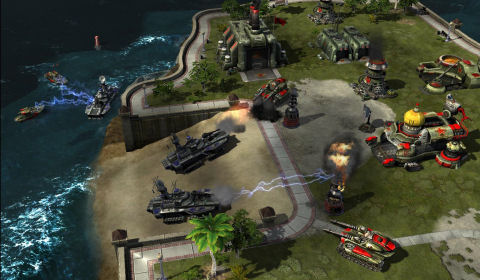 Merely seeing the words Red Alert kicks off the Hell March theme in my head.  Red Alert 2 has always been one of my all time favorite RTS titles.  When I heard Electronic Arts was creating a sequel, I was a giddy as a little girl.  When I heard the sequel would be completely designed around cooperative play...my panties exploded.

IGN has a rather nice hands on preview with the game focusing on the cooperative aspects.  Every single mission in the game is designed to have 2 commanders playing it, whether it's the AI or your best friend playing the other role is up to you.

The strategy introduced with this is incredibly interesting, and really brings some real world military tactics into play.  Perhaps the goal of a mission is to take down a set of power generators and then assault the base that becomes vulnerable in doing so.   You can easily coordinate an attack with your partner using the game's voice chat, so the second the generator falls your assault can begin.  The teamwork doesn't end at just actual offense, even though you can't control your opponents troops, you can build structures in their base to help them out.  Your buddy have a tank rush coming?  Better build some defensive turrets for him quick!

Red Alert 2 is set to come out for the Xbox 360 and PC later this month, after reading this preview, we're going to need to buy a whole package of panties.