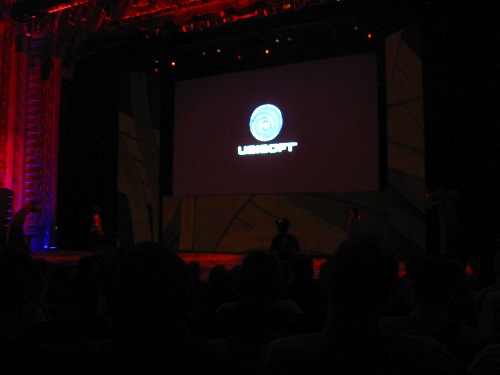 Ubisoft's 2011 E3 conference was an interesting experience this year, as the 25 year aniversary of the company has appeared. As such the show was a lot of retro-style quirks and interesting throwbacks to their original games - at least one of which is co-op now.

Games of note here were Rayman Origins, featuring a blue-guy in the co-op and some crazy fast-paced platforming action. The game looked fluid on screen, so we have high hopes for it.

Ghost Recon: Future Soldier was also showed off with interesting screen management. When you're in a group performing tactical strikes, you can see what the other three players are doing to coordinate your strike. If the action gets too rough, that split-style screen goes away. Not sure if it's at the players control, but it seemed that way from the demo.

Finally, the movie tie-in game for TinTin features two player co-op as you explore the game, and we were introduced to the experience by Steven Spielberg himself. The show also showed us Assassin's Creed: Revelations, Farcry 3 and other Ubisoft giants. I for one am excited to see what they show us with these titles, to be sure.