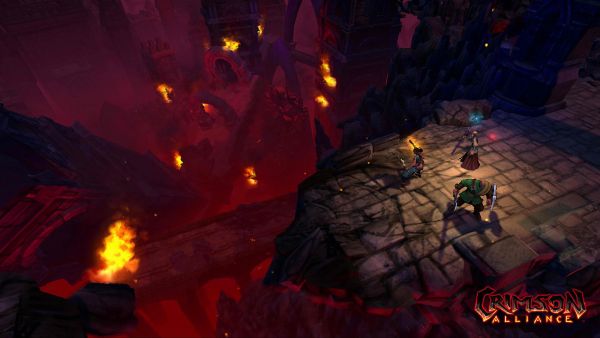 Today, I attended my first honest to goodness E3 hands-on appointment.  The lucky winner was developer Certain Affinity, makers of Crimson Alliance, yet another hack and slash action RPG.  What separates Crimson Alliance from the glut of recently released dungeon crawlers?  How about fast-paced action, a streamlined inventory, and most importantly, co-op done right.  You can play Crimson Alliance with four players online, four players locally, or any combination you wish.  And best of all, your character save data stays with your Xbox Live Gamertag.

Crimson Alliance's lead designer, Mark Tucker, played through some of an underground level with me in a local co-op game.  He chose the tank-like Mercenary, I got stuck with the Wizard.  Normally I hate sissy magic users, but I wasn't going to complain.  There will also be a third class available, a female assassin, but they're keeping a lid on her for now.  Yes, the game supports four players while offering only three classes.  You can double up on a class, or even play the whole game with nothing but Wizards, if you're some kind of Wizard-loving wierdo.

The first thing I noticed about Crimson Alliance was that the game felt finished.  I know there's a controlled environment at E3, but it simply felt like a complete title.  Animations were crisp, and the graphical style was bright and colorful.  As the Wizard, I threw fireballs, froze enemies, and called down lightning strikes effortlessly.  There's no mana to speak of; these three moves were my standard attacks.  The easiest way to dispatch foes was to freeze enemies and then allow Mark's Mercenary to smash them.  We could easily revive each other if we fell in combat.

As I mentioned before, there is a streamlined inventory system.  Each character has three equipable items.  For example, the Wizard can equip different robes, staves and auras.  These items have different effects on the Wizard's armor or attack spells, which are mapped to the face buttons.  Each item also has its own cosmetic look.  Loot is-class based and shared.  This means that if one Wizard picks up a robe, all the other Wizards in the party will get that robe, too, assuming they a haven't already picked it up in an earlier game.  Gold is shared as well.

Mark and I played through the level, encountering little resistance.  He mentioned that we were a little over-powered for the demo, which makes sense, due to time constraints.   While we played Mark pointed out explosive barrels that could be picked up and thrown at enemies.  The Mercenary brutishly hefted the barrels, while the Wizard magically levitated them.  I'm curious to see how the assassin will handle the environmental pick-ups.  I managed to obliterate a number of enemies while we had a large score multiplier, and was rewarded with the instant gratification of "Double Kill, Triple Kill," etc. appearing on screen.  The entire game has an arcade vibe.  Occasionally we happened upon consumable items like throwing knives.  Mark informed me that special weapons like these are the only items not shared in the game.

I've seen some accessible dungeon crawlers, but this one looks like the easiest to get into by far.  I don't know  if the more hardcore gamers will accept it, but Crimson Alliance is a hack and slash game anyone can pick up, play, and enjoy.  A quick note for you split screen aficionados out there:  the game is all shared screen, whether you're playing locally or online.  This is an intentional design feature, since collaborative action is the main theme of the game.  We'll be looking for this one when it comes out for the Xbox Live Arcade later this summer.