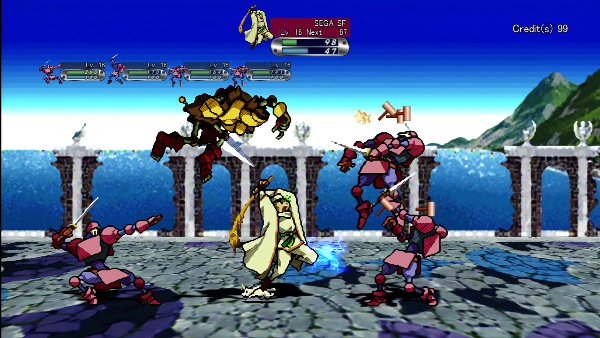 It’s time to head back to the age of Sega Saturn with this stylish HD remake of a game called Guardian Heroes. Play as one of four adventurers through an RPG brawler for the ages, as it’s re-envisioned by the same company that originally released it in 1996. I did just that at E3 2011, as a new blood to the game without any tainted nostalgia contact lenses.

The Guardian Heroes demo on the E3 show floor started me off as the big viking-esque character named Han in the standard side-scrolling style gameplay. I wasn’t joined by my other buddies at the time, but I think I got a good idea of what the co-op gameplay is going to look like.

Speaking of looks, the HD treatment hasn't lost Guardian Heroes any of its style. The art was incredibly stunning, if a bit stylized to match the Sega Saturn world it came from. This style intrigued me as it's somewhat unique while still carrying HD quality worthy of a remake.

To start off with, Guardian Heroes is more interesting than many other brawlers on the market, as it pioneered the RPG style brawler that games like Castle Crashers successfully use today. As such, I feel it will fit in nicely with groups of friends that wish to build their characters through the story. Aside from being RPG driven, Guardian Heroes is heavily story, and moral driven as well.

Players get to make decisions about whether or not to torment or release citizens, effecting their Karma meter - which later effects the outcome of the game. The depth to the enemies (The only name I saw mentioned repeatedly was someone named Kanon, part of an evil kingdom), allies, and variety in what was playable in just a short maybe 20 minute demo was astonishing. I personally look forward to this online/offline XBLA exclusive when it’s released sometime late summer 2011.