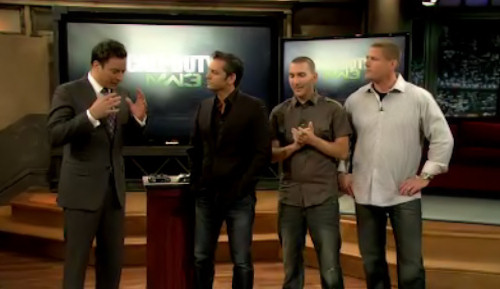 Jimmy Fallon is a fan of video games, some might even call him...a gamer.  Last week on Late Night with Jimmy Fallon, the show had guests every night from the videogame industry to show off some of the biggest titles of the upcoming year.  Publishing CEO Eric Hirshberg, Infinity Ward's Robert Bowling and Sledghammer's Glen Schofield appeared on the show to reveal Modern Warfare 3's Spec-Ops co-op mode.

As the segment kicks off,  fellow guest Simon Pegg got in on the action too.  Though "get into the action" might be being too nice.  We went hands on with the mode at E3 2011 and came away VERY impressed.  I doubt these two are getting to wave 24 though.