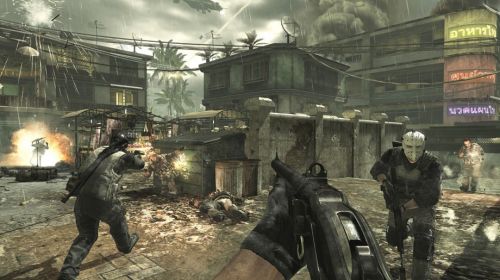 Call of Duty: Modern Warfare 3 will most definitely have co-op DLC.  A recent Kotaku article touched on the early months of the premiere military shooter's dizzying DLC release schedule.  Two new multiplayer maps will be available at the end of this month for Xbox 360 CoD Elite subscribers.  These maps will be playable in versus multiplayer modes as well as cooperatively in the Spec-Ops Survival Mode.

This is just the tip of the DLC iceberg.  Activision is planning  at least 20 new pieces of DLC through September, presumably leading up to the November launch of the unannounced 2012 CoD game, (the smart money is on Call of Duty: Black Ops 2).  CoD: MW3 is on three different systems, has a timed exclusivity contract with Microsoft, and the Elite subscription service. Figuring out who gets what and when is a daunting task.  In a nutshell, Xbox 360 Elite members will get new content first, then the PS3 Elite and PC Elite subscribers will have a crack at it.  Non-Elite 360 players will be able to purchase the content at a later date, followed by PS3 and PC regulars.  Got it?  Good.

We want to do more than just traditional multiplayer maps. We want to do Special Ops missions, new game modes as well as experiment with things we've never tried to do before. We'll go with whatever works, whatever's the most fun.

That is promising.  New Special Ops missions sound like a nice addition to me.  The first new DLC will launch on January 24th for Xbox 360 Elite members.  Check out the following video for all of the details on the new maps "Piazza" and "Liberation."

The Elite membership will cost you $50 bucks, which is totally justifiable to big CoD fans.  The rest of the world will continue to laugh at you, but hey, you get content at a slightly discounted rate, but far more importantly, you get it FIRST!

Call of Duty: Modern Warfare 3 is out now on the Xbox 360, PlayStation 3, and PC.  It supports two player local co-op as well as two player online co-op.