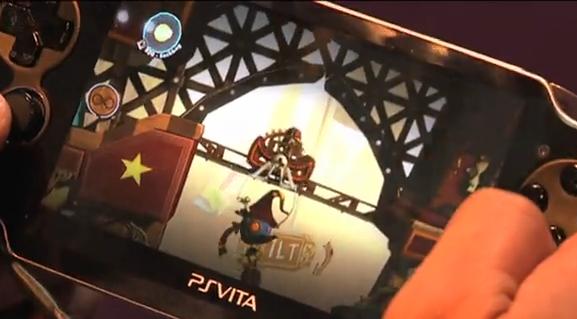 I think that we can mostly all agree that the leaps-and-bounds improvement for the PS Vita is the addition of a second joystick. Visions of downloadable PlayStation 2 games dance in my head when I sleep. Many of the games and ports targeting the PSP suffered without that second stick. But tilt control? Touch screen? Rear touch pad? Are these just some Sony gimmicks designed to drive up the price, or are they viable gameplay enhancements?

Well, since Sony has announced a quite reasonable price point already ($249 US for base model, $299 for AT&T 3G-enabled model), then I think we can rule out the possibility of sales shenanigans...as long as they work as intended.

Cue LittleBigPlanet for the PS Vita, a brand new adventure developed in-house by Sony, and the latest gameplay footage. I'm a believer.

The clearest video to date of LittleBigPlanet being played shows some really great use of both the touch screen and rear touch pad, plus tilt control and a few minutes of what looks like genuine platforming fun.

In addition to slick visuals and promising gameplay, SCEE Liverpool producer Pete Smith confirms that any Sackboy outfits purchased for the PS3 versions will be transferrable to the Vita version...and that all of the customization tools will be packed in, as well.

And finally - since you're all wondering - this portable LittleBigPlanet will rectify the complete lack of co-op from the last one. It will feature four-player co-op via ad hoc and infrastructure (LAN and online) throughout the campaign and user-created content.

I just hope they also rectify the attrocious load times.