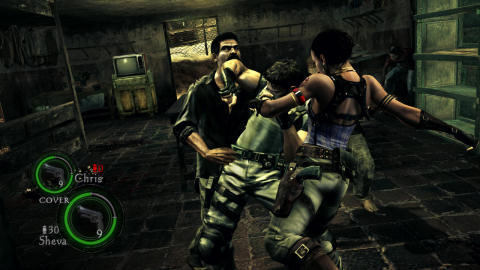 The zombies in Resident Evil games always had the upper hand, they only had to worry about one person trying to explode their head with a shotgun.  The tide has turned in Resident Evil 5 as we've got two gunslingers in action at once.  Of course, that's twice the brains for zombies to eat!

The 2 player co-op title which features a seamless drop in/drop-out experience is set to hit early next year on PlayStation 3 and Xbox 360; and the game is designed from the ground up for cooperative play.  I seem to be saying that a lot lately.

Capcom has released almost two dozen screenshots showing off the co-op action and hud.  Hit the Read More link for the full gallery.