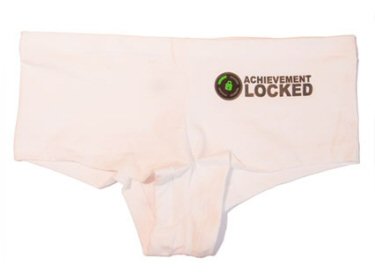 We recently covered the news of AC/DC's expansion track pack for Rock Band.  Our initial excitement was dampened by the price: 18 tracks for $40.  That's more expensive than if the songs had been released as DLC, even if you did buy them all (I'd likely get only about half).  So what do you get for the extra money?  Few details are available at this time, but there's at least one perk, for 360 owners, anyway.  A developer post on the official Rock Band forums promises there will be unique achievements for the Track Pack.  At first, PS3 Trophies were included in the announcement.  However, the post has since been edited with this explanation:

Removed mention of trophies, which are not supported.

This is unfortunate news, indeed, for PS3 Rockaholics.  All is not lost, through; this news item gives me an excuse to use the image of the Official Achievement Underwear!  You just know that when you're rocking it out to "Back in Black", all sorts of groupies will be tossing their undergarments up on stage for you!  Get it?  The underwear are the achievements.  Ahem.  If the joke seems lame, blame Nick: he started it!