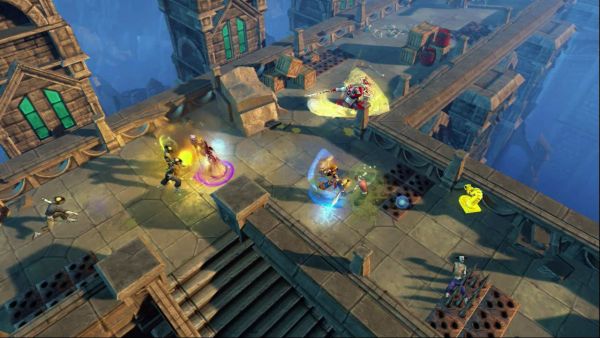 Who wants to play outside?  No one, that's who.  It's frick'n hot out there. The summer doldrums are upon us.  The season is traditionally a gaming wasteland populated only by a few spartan releases.  Good thing the XBLA has the Summer of Arcade, version 4.0.  These downloadable titles will offer a comfortable oasis in the desert that is pre-September.  They'll get you out of your summer rut.  As an added bonus, if you pick up all five SoA titles, you'll get a free copy of Crimson Alliance, an arcade-y co-op dungeon crawler we previewed at E3.  Read on for the lineup, release dates, and pricing.

Bastion - A beautiful - unfortunately single player - action RPG.  We previewed it at PAX East despite it being single player.  This title will start the Summer of Arcade with a bang on July 20 and cost 1200 Microsoft Points ($15).

From Dust  - Holy cow!  That looks pretty damn good for a downloadable game.  Sadly, it's only single player.  See for yourself on July 27.  It will run you 1200 Microsoft Points (still $15).

Fruit Ninja Kinect  You saw it, you can't un-see it.  Get yo' 2 player local co-op ninja fix on August 10 for 800 Microsoft Points (which have a current street value of $10).

Toy Soldiers: Cold War  Ah, glorious split screen co-op play, how we love you!  There's also 2 player online co-op, for those of you who don't have any local friends.  This wraps up the Summer of Arcade on August 17 for  1200 Microsoft Points (you guessed it, $15).

Three out of five games have co-op, and that's not half bad. (It's three-fifths good.)  Bastion and From Dust look interesting as well.  Time to search in between the couch cushions for those extra Microsoft Points.  You never know where they'll turn up.  The XBLA Summer of Arcade starts July 20.