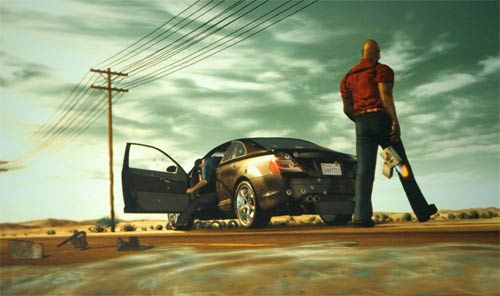 During E3 2006 I remember a standout video of a game called Eight Days.  The video took place at a desert diner and featured a gang related shootout between two cops and some thugs.  What made it stand out?  A slick cover system, smooth animations, and a some tense action sequences.  Sadly the Sony London developed game was canceled before it saw the light of day.

Ok, so why talk about it now?

One of the game's developers, Richard Bunn,  is now doing mobile development and chatted with Eurogamer about the title.  Turns out Eight Days was going to be a buddy cop game.

"It was going to have online co-op," Bunn said. "The entire concept behind the game was based around buddy gameplay. Imagine Uncharted, where you have two Nathan Drakes, and you can cover swap between each other and chuck ammo between each other. That was pretty much the game.

This makes us incredibly sad.  If anything I'm surprised another developer hasn't picked up on the "tossing ammo" in co-op aspect.  Hunted: The Demon's Forge allowed you to toss a revive, but I can't think of a game that allowed you to actually toss ammo from distance cover.  Eight Days seemed to have potential, but something must have caused Sony to cancel the title.  I guess we'll never know.