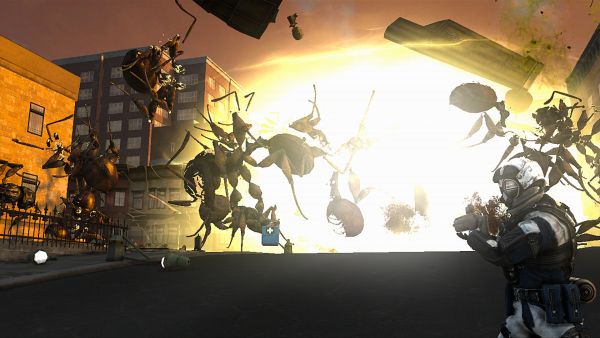 The pre-order bonus guns for Earth Defense Force: Insect Armageddon are now available as DLC on both the Xbox LIVE Marketplace and the PlayStation Store.  These were the pre-order bonuses offered through Best Buy and GameStop.  The gun packs are called "Death from Above" and "Pounds of Pain," and they're mostly centered on the Jet Armor and Battle Armor, respectively.  A few other weapons for the Tactical and Trooper armor sets have been tossed in for kicks.  You can see them in action here.  The DLC will cost you 240 Microsoft Points, or $2.99 in real money.

I happened to have some Microsoft Points laying around in my change jar, so I took the "Pounds of Pain" pack out for a spin.  The weapons are of varying power tiers, so they run the gamut from Tier One Crap to Tier Seven Insecticide.  If you're a big fan of the game you'll probably want to add these to your collection.  There's worse things to spend three bucks on (like stocks).   You can check out our EDF: IA Co-Op Review right here.  The game supports two player local co-op and six player online co-op.