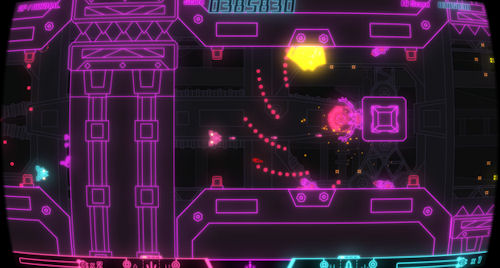 Q-Games have been on a roll with addictive cooperative games for the PlayStation Network that look good to boot.  From PixelJunk Monster with its tower defense to PixelJunk Shooter 1 and 2 with their addictive strategy and action, we've grown to be fans of the Japanese studio.

Now the next co-op game in the PixelJunk franchise will be called PixelJunk SideScroller - and its exactly what it sounds like.  It's a Gradius style game meets modern, almost Geometry Wars style graphics.  Giving the game an extra touch the screens make it look like you are playing on an old school arcade machine - complete with CRT image distortion.

You can expect a full array of weapon upgrades for your standard machine gun, laser beam and homing missiles to take down a variety of enemies and bosses.  We'll even see some familiar material from the Shooter series like lava and other environmental dangers.

PixelJunk SideScroller will support two player local co-op play when it's released later this year on the PlayStation Network.