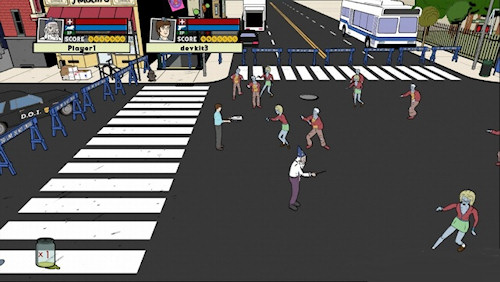 Ugly Americans is a cartoon series on Comedy Central about quirky, undead, and other unique individuals that become integrated into life in the Big Apple.  The show's characters are now part of a new game called Ugly Americans: Apocalypsegeddon.  With characters like a wizard, a zombie, and a police officer - it seems ripe for some ridiculous looking action.  The game features all of the voice actors from the show, while the story is penned by the writers and the show's creator Devin Clark.

The $10 game releases today on PSN and tomorrow on Xbox Live Arcade and features four player local or online co-op twin stick shooting action.   Here's a short video of it in action.