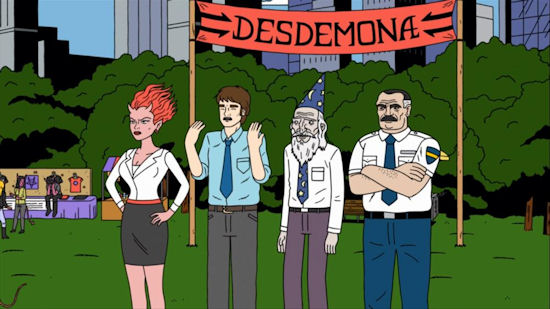 Sales are a great time to give uglier games a chance. You know, games you weren't dying to buy at launch, but always kind of wanted to play.  With that in mind, now's a great time to try Ugly Americans: Apocalypsegeddon. The Xbox Live Arcade version has just gone on sale for 400 MS Points (its first discount) as part of Microsoft's Shocktober promotion. Also on sale are a handful of other horror-themed games, including co-op zombie slaughterfest Dead Rising 2.

In case you missed our co-op review, Ugly Americans is a twin-stick shooter based on the Comedy Central animated series - which just got a second season earlier this year. The graphics may be a little rough, but it has several nice features including exclusive animated story scenes, a full unlockable episode of the show, easy Achievements, and a demon baby Avatar prop that's quite easy to unlock. 4-player online and offline co-op rounds out the package. Even if you haven't seen the show (for shame), the game is worth a shot.

To grab the Shocktober games from Xbox.com, head to the promotion's page (which lists some non-sale games too).

Separate from the Shocktober sale, the Sales & Specials app has a fine co-op game on offer this week. Simply load up the app, try the scratch and win game, and then you'll gain access to the following deals:

Do any of this week's sale games catch your eye, dear readers?