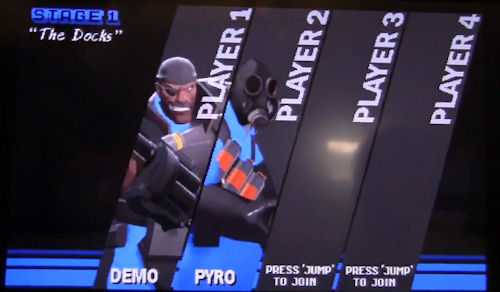 Team Fortress 2 is arguably one of the most popular games available on Valve's Steam service.  It consistently competes with Counter-Strike for the game with the most active users, has taken on a life of its own with items and microtransactions, and features some pretty amazing personality.  Now the game is getting a retro style beat-em-up/shooter courtesy of Eric Ruth Games called Team Fortress 2 Arcade.  If that name sounds familiar that's because they also created the 8-Bit Left 4 Dead game.

The game features nine stages as players control the Blue team and can choose any one of Team Fortress 2's nine unique player classes.  Each character has a primary fire, a jumping secondary fire, and a melee attack. Some classes, like the Soldier, have special abilities like Rocket Jumping.  Each one of the nine stages culminate with a boss battle against a Red Team's class.

Team Fortress 2 Arcade is a PC game and will be playable in four player local co-op adding to the strategy and fun of the game.

We got word from Eric that the game is going to be released in about 2 weeks, so keep your eyes posted here at Co-Optimus or the Eric Ruth Games official website.

Here's a recent interview with some gameplay footage from Pikmal.com.