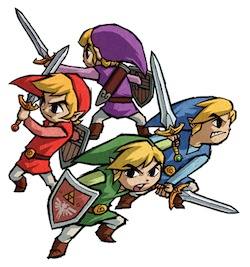 The Legend of Zelda: Four Swords Adventures is coming to DSi Ware next week on September 28th.  The game will be completely free for a limited time, almost 5 months in total, until February 20th 2012.  While the original GameBoy Advanced / Gamecube title required link cables between the systems to play the four player co-op mode, the new game will allow for wireless LAN play between Nintendo 3DS,  Nintendo DSi and Nintendo DSi XL systems.

But the game isn't just a quick port of the original, in fact, Nintendo has added new content to this release.  This includes an all new single player mode where players control two Links, new locations to explore, and even a new move for your character called the Hurricane Spin.