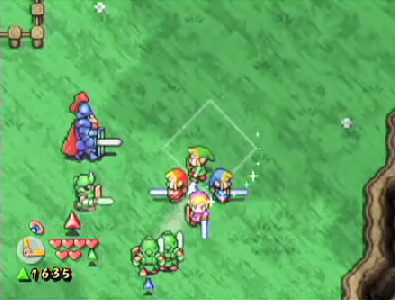 We previously reported that The Legend of Zelda: Four Swords Adventures would be coming to DSiWare in the future, and for free, to boot. Nintendo has just revealed that it will be available in September.

The DSiWare version will be playable on either the DSi or 3DS handheld systems. It’s a port of the multiplayer portion of GameBoy Advance classic The Legend of Zelda: A Link to the Past. Not only will up to four Links team up to take on maps and puzzles that require teamwork to complete, but they can also be totally annoying to each other. Four Swords allows players to stab their teammates, set them on fire, throw them into pits, and more. I had a blast with the original GBA version (as well as the fantastic GameCube sequel), so I’m actually wishing I had a 3DS right now.

We’ll let you know as soon as The Legend of Zelda: Four Swords Adventures is available to download.