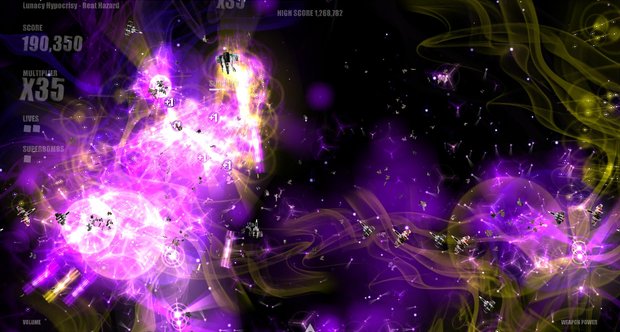 It wasn't long ago that we told you that Beat Hazard Ultra was coming to PSN in September.  Well September is almost over and there's still no Beats to be Hazard.  That's because the game has gotten a slight delay, after all - it's a one man development team.  Don't fret - there's an official release date, and that date is, October 18th.

Beat Hazard Ultra combines the original PC game with it's downloadable content that adds online multiplayer and co-op and combines it into one package for $9.99.  Apparently the game was going to be coming to Xbox Live Arcade as well, it's already an Xbox Live Indie Game, but it was rejected by Microsoft according to Shacknews.  Either way - you can enjoy the twin stick shooter on any platform at this point (except the Wii) - but the PC and PSN are the only ones with online co-op too.