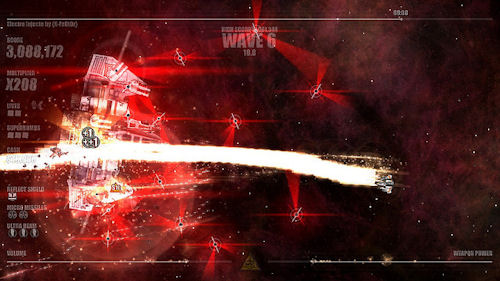 Beat Hazard is finding its way to the PlayStation 3 this September - a game that has already seen release on the Xbox 360 and PC.  The twin stick shooter utilizes your music library to generate enemies, bosses and effects as well as govern how you power-up and play.  It's a truly unique and colorful experience and one of my favorite games to pass time with on Steam.

The PSN version of the game will include the "Ultra" DLC that's out on the PC meaning you'll be able to play two player online co-op with a friend over PSN or two player local co-op.  Also included is versus play and a boss rush mode as well as all the new powerups.

The PlayStation Blog has a great post from the game's developer, Steve Hunt.  He's a one man show and completely wrote the game for each platform all by himself.  He mentions it took about 6 months for the PSN version.  Quite impressive, but not as impressive as actually watching this game in motion.