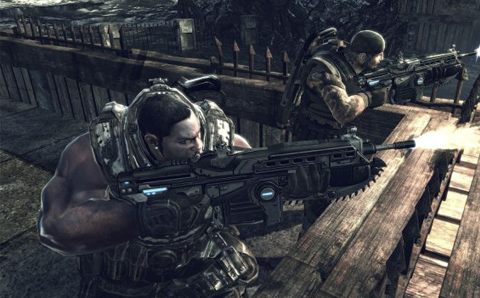 This week, Gears of War developer Epic Games has given its collective blessing to release details and impressions of the welcome Horde Mode addition to their latest upcoming masterpiece.

Aside from the classic splitscreen/online two-player campaign, Horde Mode allows up to five friends to band together against increasingly difficult waves of Locusts. Players will be able to choose their preferred arena of carnage from potentially fifteen multiplayer maps at launch, utilizing up to eight unlockable characters.

Kotaku, IGN, and GameSpy have each put up their impressions, which are mostly -- if not completely -- positive about the new mode.

Hit the "Read More" link for the usual lineup of select quotes and source links to the original articles.

There’s a vague incentive to kill steal. It’s rewarding to see yourself at the top of the list at the end of a wave with seven score marks by your name.

I have no idea how anyone is going survive all 50 waves of Horde mode – even after I switched out with a more hardcore shooter journo, the group never made it to wave 20 in the hour we had to play.

Ball-breakingly difficult or not, Horde mode does stand out from your average multiplayer romp because it’s co-op survival instead of just you against the AI.

After Wave Ten everything restarts, but with a twist. Every tenth wave the enemies get a bonus. The first time their health is doubled, then their accuracy, then their damage. By the time you're on Wave 45 it'll feel like you're fighting an army of super-soldiers.

Each of the ten new [maps] can be used in different ways. Pavilion, for instance, is an above and below ground environment with no place to call home in Horde mode. It's basically run and gun or be killed before you know it. Different players are going to have to adapt their skills if they want to reach the top of any of the fifteen leaderboards.

Unlike the last game you'll now have a few options to check out the action. First, there's the new Battle Cams. They're fixed positions around the map that you can rotate between and they'll always auto-focus on the most battle-intensive parts of the map. There's also a Ghost Cam mode that allows you to float around the environment, calling out locations to your teammates if it's fitting for the game mode. Players will also have the ability to snap screenshots, have them scored by the game for its number of particle effects and general amount of action happening on-screen, then upload your frozen moments in time to a leaderboard.

Players will be able to help their fallen comrades during battle, but all that really matters is that at least one player survives the round. If there's still one soldier standing, all of the other players will be revived at the start of the next round.

Because your enemies will get tougher and tougher, you'll need to communicate with your teammates and figure out the best places on each map to make a stand.

It'll be very interesting to see how far people will be able to make it on the tougher modes, as the highest we got was level 47... on Casual.

As usual, we encourage you to check out each of the sourced articles for more impressions and some pretty cool stories describing the experience.