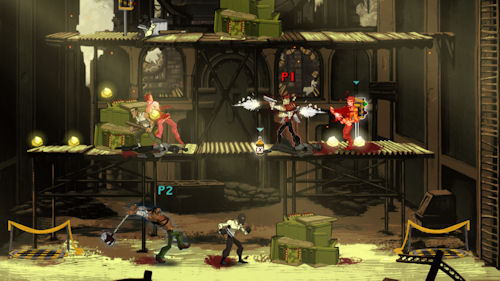 At a recent EA event in NYC I got to go hands on with Shank 2 and it's new survival based co-op mode.  While the first Shank offered a short co-op campaign, developer Klei wanted to make something that had a bit more legs and replayability.  Alongside creating this brand new co-op mode with a bunch of different characters to choose from, rather than just two like the first game, the team managed to add online co-op to the mix.

The level we played had three tiers on it, each one with an ammo cache.  Our goal was to defend the enemy from bombing and destroying all three crates of ammo.  We had to do this until...well until infinity.  There's no end game in this survival mode, instead it's all about high scores and surviving as long as can.  Scores are increased by performing combos, killing enemies, and of course...surviving.

The match started off at a gentle pace, with enemies spawning in from different areas.  It wasn't hard to defend the crates, and if one happened to have a bomb planted on it, there was ample time to diffuse.  But as the waves began to heat up, so did the enemy numbers.  Shank 2's animation system is shown off here in glorious detail, as not only are the enemies you fight gorgeous looking, but the spawning animations that can occur are equally as impressive.  Large colorful and animated characters sometimes pop up in the foreground looking at (and sometimes taunting) the player before spawning in bringing you deeper into the Shank 2 world. After each wave you're given a few seconds to purchase items to assist you and your co-op partner.  You'll use the points earned from the previous round(s) and stock up on grenades, beer (health), baseball bats and even an airstrike.  One of the biggest additions to Shank 2 is the ability to pick up objects to be used as weapons - the aforementioned baseball bat is one of them and hitting enemies with it makes a satisfying thud.  The airstrike will clear the map of any enemies when you find yourself in a pinch.

Along with the purchasing of weapons and items, random supply crates will drop throughout the matches containing goodies to prolong your survival.  If you do go down, your partner can revive you.  Obviously both players going down ends the match.

It didn't take long for me to reacquaint myself with Shank's controls, and Shank 2 has an even tighter and more satisfying combat system.  Picking items up is now mapped to the Left Bumper, so no longer will you accidently pick up a beer while trying to revive a fallen friend.  Combos were satisfying and fluid and there's even a new countering system which lets you brutal finish off enemies as they try to take a swing at you.

My co-op session ended around wave 9 or so, we fought a few bosses during that time and had several close call moments.  There may or may not have even been some high fives exchanged.  There's no word yet on how many levels co-op will be playable on, or what other types of goals we can expect to play on them, but what's on display currently is addictive and fun - and that's good enough for me.

Shank 2 is out in early 2012 with two player co-op on Xbox Live Arcade, PSN and the PC.