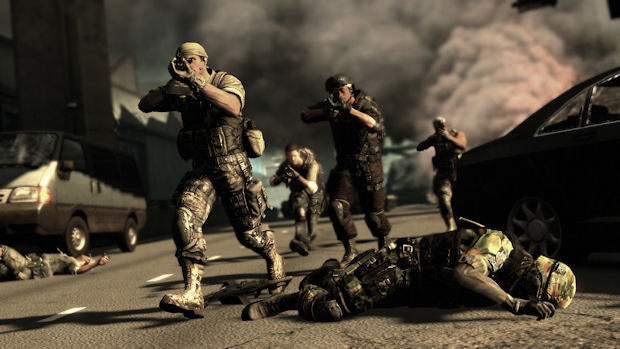 The Demolition pack for SOCOM 4: U.S. Navy SEALs drops this week, which should make some veteran SOCOM players pretty happy - it adds quite possibly the most popular team-based mode from the classic multiplayer days to SOCOM 4. Along with the announcement, however, comes news that another pack will arrive on November 1st that adds exclusively co-op content.

The Evac Co-Op pack will include a new mode (Evac), two weapons, six character skins, and a new area (called Onslaught) that is playable in all three of the co-op mission modes. Descriptions are below, because it behooves you to know the codenames of your new squadmates and what new weapons you'll be toting. The Evac Co-Op pack will cost $7.99 U.S.

Included Weapons:
AM50 – It doesn’t carry many rounds and it’s slow to fire, but the AM50 will kill with a single shot anywhere on an opponent’s body.
M82A1A – A very low firing rate and lower than average ammo capacity is offset by the M82A1A’s ability to take down an opponent with a single round.

New Mode - Evac
Players are caught behind enemy lines and must fight their way out alive. Your pick-up vehicle is on-route to a designated location, and it’s up to you to fight your way there and defend the point until your exit arrives.