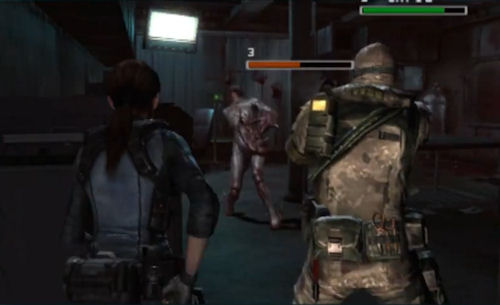 While the 3DS has already gotten a dedicated cooperative Resident Evil game, the next Resident Evil game - despite being single player focused - will also offer a co-op mode.  Resident Evil: Revelations will have a cooperative mode for two players called Raid.  On the surface it seems very similar to the co-op found in the Mercenaries mode in previous RE titles, though there's a few unique twists.

The focus of Raid is on collecting loot dropped by enemies and gained by completing levels.  You'll still be trying to get high scores playing as either Jill Valentine or Chris Redfield, but Capcom wanted to go for an RPG-like feel of going on a Raid in an MMO.  So with that you'll see health bars floating above enemies and players similar to these style of games.  Raid mode will be playable via Ad-Hoc or Infrastructure wi-fi, so you shouldn't have a problem finding a co-op partner.

Along side this news, it's also been revealed that Resident Evil: Revelations will be the first 3DS game priced at $50, $10 more than the normal price tag for games on the system.  While many fans have balked at this decision, Capcom does have a legitimate reason for it.

So there you have it.  $50 for a portable game.  Might be a tough sell, especially on the 3DS.  Ironically Amazon has the game up for pre-order at the discounted price of....$40.