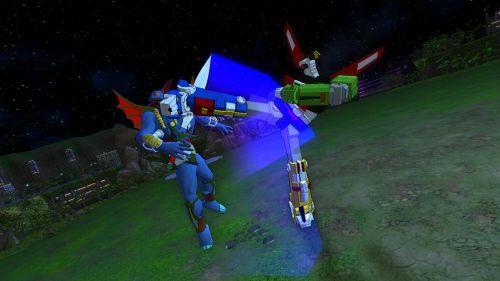 Is it safe to come out now?  I think the holiday rush is officially over.  All the big retail games made it to store shelves before the travesty that was Black Friday.  The end of the year is rapidly approaching, and new releases will be few and far between.  We've got two downloadable co-op titles this week.  Then the backlogging begins!

Ion Assault (PSN) This twin stick shooter has been available for the XBLA and PC for a while now.  We liked it on the XBLA, giving it a 4 out of 5 in our Co-Op Review.  The PSN version will have a new area and a few new levels.  2 player local co-op, 2 player online co-op

Voltron: Defender of the Universe (XBLA, PSN) Since I grew up in the 80's, I'll be picking this up as a matter of principle.  That principle being: "Voltron is awesome." At least, it was awesome when I was a kid.  It's got giant robot lions that combine to form an even more giant robot who fights aliens, robots, alien robots, and robot aliens.  2 player local co-op, 5 player online co-op

Here we have a few retail releases.  Please use the Amazon links and help support Co-Optimus!