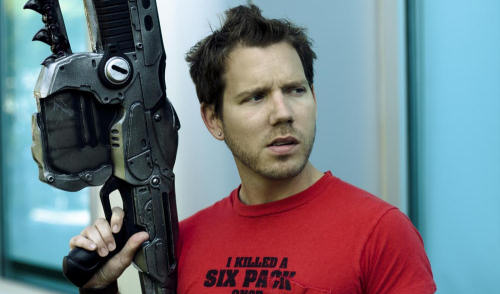 If you are looking for a really interesting read on Gears of War 2, and more specifically the game's lead designer Cliff Bleszinski - look no further than this lengthy New Yorker Article.  Granted there's no specifics of cooperative play discussed, but that doesn't make it any less a worthwhile read while hyping yourself up for the co-op shooter.

The article discusses Cliff's origins with Epic, from his first (and failing) game submission Dare to Dream.  It looks at the origins of Gears of War, including one interesting tidbit about the original inspiration for the series.

An example of this is Gears’s famous “cover” system, an innovation of Bleszinski’s, which demands that the player move with chess-like care and efficiency around the battle space, using walls, doorways, barricades, and the scorched husks of vehicles as cover. Bleszinski told me that a paintball match had impressed upon him the ludicrousness of how most shooters operated, with players running around in the open, strafing their enemies and jumping to avoid being shot. “Getting hit by a paintball freaking hurts like hell,” he said. It occurred to him that a shooter based on the idea of taking cover would be a more realistic and primal experience.

There's really a ton of great content here, including some choice quotes from several folks involved.  It's really an interesting read to see a mainstream journalist take such an in depth look at an individual, a company and a game.    I highly recommend you give it a read.