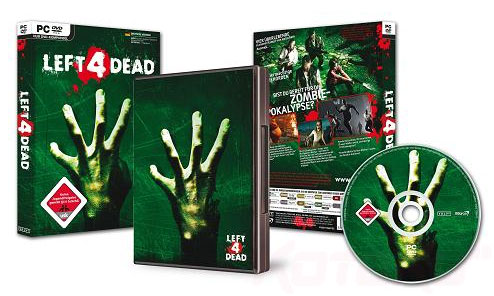 I know, Co-Op gaming has nothing to do with box art.  But hot damn if we haven't covered Left 4 Dead's awesome box art in great detail.

So it comes with great sadness that we are to inform our German brethren that their box isn't quite as awesome.   Well...at least on the surface.  You see, apparently a picture of a missing appendage doesn't quite fly off the store shelves, or rather fly ON the store shelves.  So with that the box art has been censored to show a zombie hand merely making the number 4.  Lame-o.

Fret not my beer drinking zombie slayers!  Upon opening the outer box you'll be greeted by one less opposable digit.