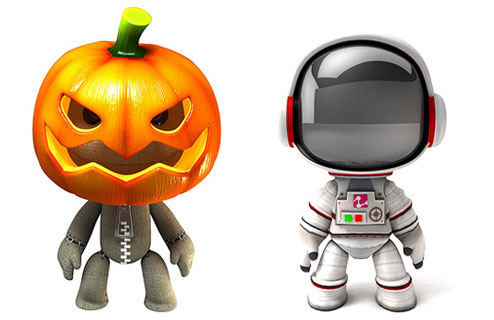 We continue to get reports that the LittleBigPlanet servers are down more often than a fat kid on a see-saw.  Despite a new patch being released yesterday, there's been mixed reports of it actually doing anything.

Sony realizes that it's not all rainbows and unicorns, and in an effort to make amends, has decided to release some downloadable costumes for your SackBoys for free.  Sure we already knew about the SpaceSuit, which was only supposed to be available the first week, but now has become a "seasonal item" along with Mr. Pumpkin head over there.  Word on the street though is North American markets won't see these till November 11th.  I mean...why in the world would you need pumpkin-sack earlier?

Along with these free items there are already half a dozen premium items that are going to be available soon for about $2 a costume.  Most of these you already know about.

Here's to hoping the folks at Sony can get some stable servers for the weekend!