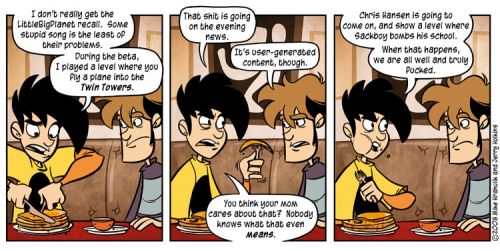 Penny Arcade is normally a good source of critical coverage of gaming news, even though they are first and foremost a webcomic. However, they normally are able to combine critical analysis and fun webcomic goodness. An example of this is their recent comic about Little Big Planetand its delay. In the comic, they remark that the inclusion of a song with lyrics from the Qur'an is not nearly as bad as the kind of stuff that the online commuity will come up with.

The news post in relation to the comic goes into further detail. It discusses the idea that games with user-generated content might not be as wide-open as possible, considering the large outrage created by a simple song in the game. The article and comic provide an interesting look at user-generated content and what this means for gamers and co-op gamers alike. Might user generated content (on consoles) be more limiting than we first thought?