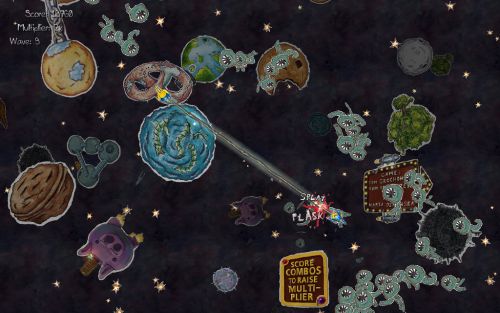 Our website was made to cover this game, without a doubt. MoaCube, under a 24 hour timeframe, created the artistically pleasing game, Co-Op, and showed us that a decent co-op game can be made within extreme limitations.

After reading about and looking more into this little bit of news, I can safely say that I am a huge fan of the indie game community. Not only was this game developed at the DBC Games Jam (sort of like a small game developer conference where they do game design experiments), it was also completed under 24 hours. Jeepers. That’s quite an impressive feat for anyone to have under their belts, especially with a quality game such as this.

So what is Co-Op about exactly? Take a look at it and see what you think:

You and your co-op partner are both spaceships connected to a stretchable beam of some kind. The basic idea is to play “Red Rover” with your partner, smashing your connecting line through waves of enemy aliens and other ridiculous objects. The more you get in one strike, the bigger the point multiplier. But like the name states, the game requires massive cooperation between the both of you to score big numbers.

The only problem I learned about this game was that it’s a slightly less user-friendly. It does support co-op (hence the name) but two people playing must be on the same keyboard for it to work. Sorry my online gaming fans! But in a way, this might make the “co-op experience” that much more fulfilling. I mean, its name is Co-Op after all. Still, it is an interestingly humoristic game that shows what indie developers are capable of and should be given much more credit for it.