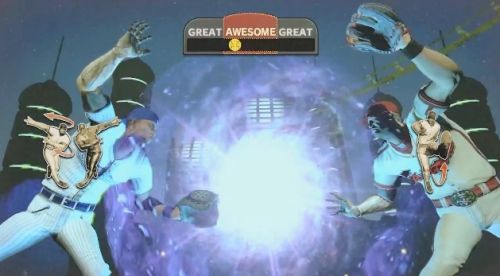 Diabolical Pitch is great awesome great.  Don't believe me?  Check out the header image.  What's it say?  "Great awesome great."  That's right.  Players pitch imaginary baseballs at an assorment of monsters to save the world, or escape a carnival, or rescue their girlfriend, or something.  Developer Grasshopper Manufacture hasn't divulged too much of the plot, not that it's really necessary.  Throw stuff, kill stuff, it's Diabolical Pitch!

Those two guys in the image are about to perform a cooperative fusion attack.  You probably saw it in the debut trailer we ran back in September.  Missed it?  That's okay.  I'll post it again right after this paragraph, in case you're afraid of clicking blue text.  If that is the case, your internet experience must be horrifying.  Prepare to be THUNDERSTRUCK!

Did you see that!?!  Grasshopper is once again bringing the crazy.  Seriously.  Their website hurts my brain. Could this game look any more awesome?  Lets see what happens when a normal person (who lacks bangin' hair) gets in front of a Kinect:

...Really?  Could we get a little more enthusism?  The booth babes are more into it than he is.

This game looks like it's in dire need of a video review by me, throwing heat until my arm rips out of socket.  If you're playing a Kinect game you better bring it, dammit, or else what's the point?

There are other co-op moves apart from the fusion dance.  According to Siliconera, that's not simple theatrics by the downed player in the first video.  You'll actually have to drop to one knee and have the other player pick you up if you want to be revived.  No word on whether or not mouth to mouth will be implemented in later levels, but my fingers are crossed.

Diabolical Pitch will be out exclusively for Kinect via the XBLA on April 4th.  It supports two player local co-op.