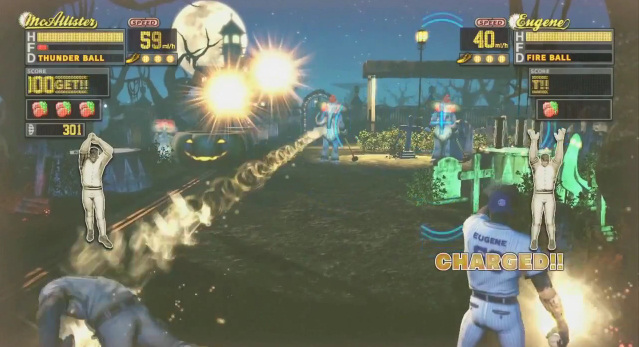 Kinect games have great potential for wackiness. Nowhere is this more clear than Diabolical Pitch, a recently-announced XBLA title from Grasshopper Manufacture. How many other games cast players as baseball pitchers who use super-powered throws against armies of monsters in a carnival setting?

Few details have been released, but Diabolical Pitch’s teaser trailer conveys the idea pretty well. In addition to standard pitches, striking special poses performs a variety of super moves. Also sometimes you get a bat. It’s silly awesome. Even better, two players can team up for some cooperative monster-pegging. It looks like you’ll be able to heal a downed partner by reaching to him or her, though that could just be the trailer’s theatrics.

Diabolical Pitch will step up to the plate sometime in 2012. Co-Optimus will have more details as soon as they become available.